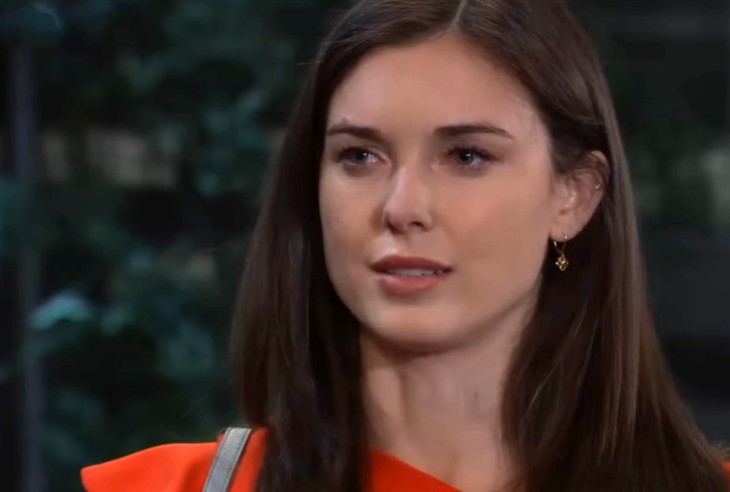 At GH, Willow Tait (Katelyn MacMullen) loses her temper as she finds out someone knows about her condition, and possibly that she’s delaying chemotherapy. Willow lashes out and asks someone who told them? Someone obviously is playing a bit loose and free with the HIPAA regulations at the hospital.

Well-meaning or not, Willow didn’t want anyone, and in particular Michael to know she has leukemia. She doesn’t want him or anyone else to know that she’s delaying chemotherapy till the second trimester either.

Kristina is nervous, still reeling from seeing Brando Corbin (Johnny Wactor) attacked with a hook as Jordan says she needs to speak to her. Jordan needs any detail Kristina might remember, no matter how unimportant it might seem, to try and get a lead on who possibly might be a serial killer.

Kristina had promised she’d try to help in any way she could, but it was dark, pouring rain, and it was an extremely violent and gruesome act she’d witnessed. Perhaps Jordan might see if Kristina would allow Dr. Kevin Collins (Jon Lindstrom) to hypnotize her to see if any subconscious details might emerge.

Meanwhile, at the rooftop pool at the Metro Court, Rory Cabrera (Michael Blake Kruse) and Trina Robinson (Tabyana Ali) are talking. It sounds like they are discussing Trina’s long conversation with Spencer Cassadine (Nicholas Chavez) at her party.

As Trina talks to Rory about Spencer, Rory wants to know now that she knows the truth if it changes anything with Rory and her.

Spencer will be in Pentonville Prison serving out his sentence for three months, so Trina will have plenty of time to think about it. She looks pensive as Rory presses her for an answer.

Back at the General Hospital intensive care unit, Nikolas asks Ava Cassadine (Maura West) if she wants him to be guilty, now that Sonny Corinthos (Maurice Benard) knows he isn’t.

Nikolas was there in the hospital with Ava when the second hook attack occurred, and the PCPD are thinking it’s a serial killer. Ava certainly must be giving her husband a hard time and not letting him “off the hook” so easily for what he has done to her.

Nikolas broke her trust, humiliated her, and hurt her very badly when he slept with Esmé Prince (Avery Kristen Pohl).

Michael gives Dex a reminder who’s boss, and that it’s Michael, as he asks him what else he has to do to earn Sonny’s trust. Dex was right there in the area of Charlie’s Pub when the latest hook attack happened, and Michael may wonder if it was him.

The attacker used a gaffing hook to attack his victim, and wore a black or dark colored coat with a hood.

Attacking Sonny’s cousin isn’t going to engender trust in Sonny, and Dex doesn’t have to take over the tour of the Pine Barrens to do it. Michael reminds him anyone there that night could be a suspect in the PCPD’s eyes.

Back at Ava’s room in the ICU, Sonny continues talking to Nikolas and Ava. He tells them there’s been another attack, apparently by the same person that attacked Ava.

Whether Sonny discloses that it was Brando Corbin (Johnny Wactor) who was attacked remains to be seen, although he may reveal Kristina saw it. Sonny tried to keep Brando from bleeding out while Kristina called 911, with ambulances arriving soon afterwards. Brando’s a fighter, but the paramedics almost lost him before transport.

Outside the operating room that Brando was taken to, a fearful Sasha demands answers from TJ Ashford, (Tajh Bellow) who with Dr. Portia Robinson (Brook Kerr) were going to operate. Gladys Corbin (Bonnie Burroughs) is most certainly with Sasha when she wants to know why TJ isn’t at Brando’s surgery and what’s wrong.

Brando’s lung had collapsed in the emergency room and he and Portia did what they could there, and took him to surgery.

It sounds like Sasha and Gladys are going to receive unbelievably traumatic news from TJ. Brando may have died before they could operate, and couldn’t be revived.

Days Of Our Lives Spoilers: EJ Gets The Shock Of His Life