Days Of Our Lives Spoilers: EJ Gets The Shock Of His Life 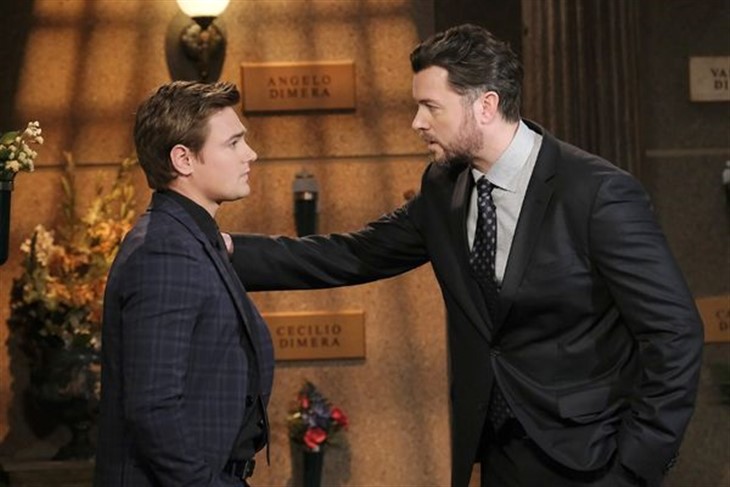 Days Of Our Lives Spoilers – More Back From The Dead

EJ DiMera (Daniel Feuerriegel) finally got rid of one brother he never wanted and now it looks like that brother is back — except he isn’t. Nope, it’s not Jake DiMera (Brandon Barash). It’s Stefan O. DiMera (also Brandon Barash), a brother he never met but one who can definitely give him a run for his money in business.

EJ can hardly believe his ears when Gabi Hernandez (Camila Banus) informs him that her dear departed husband is alive and well. Does she mention that he doesn’t seem to want to be her husband anymore? While that news would thrill EJ, he also will have to come to terms with the fact that Li Shin does want to be Gabi’s husband, so he is not through with her yet.

Stefan and EJ look like they may not get along very well, but if they have a common goal in mind regarding Gabi, they could become quite a team. But first, they will have to get to know one another.

Chanel Dupree (Raven Bowens) may have chosen Allie Horton (Lindsay Arnold) as her life partner, but it wasn’t an easy decision considering her feelings for her twin, Johnny DiMera (Carson Boatman). While Johnny was heartbroken at first, he’s moving on the way Chanel has moved on.

It may not make sense that he is suddenly obsessed with Ava Vitali (Tamara Braun), but this has Chanel jealous and maybe that is the way Johnny wants it. Of course, this is not the way Allie wants it and the situation is bound to cause trouble.

Days Of Our Lives Spoilers – Things Get Ugly For Bristen

Despite Kristen DiMera (Stacy Haiduk) being a known felon who has committed numerous crimes throughout the decades, she still seems to have a chance of winning custody of her daughter, Rachel Black, from Brady Black (Eric Martsolf).

That doesn’t mean things aren’t going to get dark and ugly in court as Brady and Kristen battle it out. Which one is flinging mud at the other? Stream Days of Our Lives weekdays on Peacock by 6 am EST each morning.

Y&R Spoilers: Nikki And Victor Team Up To Destroy Diane