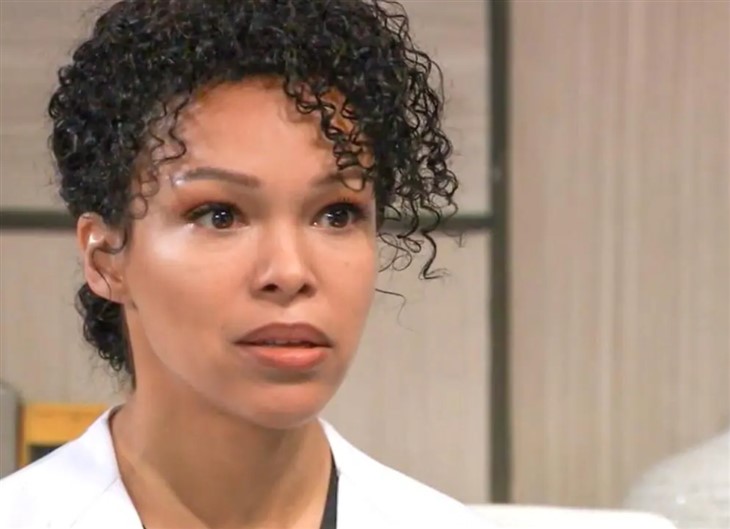 At GH, Portia reveals something she knows about Jordan Ashford (Tanisha Harper), or suspects, to Curtis Ashford (Donnell Turner). After the revelation that Jordan and Curtis’ divorce papers were never filed and they’re still married.

Curtis updated Portia on the situation. Portia suspects that perhaps Jordan hasn’t really moved on from Curtis and she still has feelings for him.

The implication is that Jordan didn’t file the divorce papers purposely, after Curtis told Portia something didn’t feel right about her story. Portia reveals to Curtis that Jordan doesn’t really know how she feels about him.

TJ looks confused at the hospital as he asks someone to clarify why they’re asking him this now; it could be his mother, Jordan. She had tried to get information from the genealogy site about Stella Henry’s (Vernée Watson) unknown relative in Port Charles but they couldn’t give it to her.

At the time, Trina had done a DNA test too and also got a result of an unknown relative in Port Charles but didn’t pursue their identity. Jordan is fairly certain that Portia is hiding Trina’s true paternity from Curtis.

General Hospital Spoilers – Getting Together To Talk

At the PC Grill, Sam McCall (Kelly Monaco) is having lunch with Drew Cain (Cameron Mathison) for the first time in years, as they discuss their relationships with each other.

Drew is in the early stages of a romantic relationship with Carly Corinthos (Laura Wright) while Sam is pretty heavily involved and serious with Dante Falconeri (Dominic Zamprogna.

Drew and Sam do share a daughter, Emily “Scout” Cain (Ella Ramacieri) who they presumably are coparenting.

It sounds like Sam is talking about her relationship with Dante as she smiles and says it doesn’t mean you can’t mix business with pleasure. Sam is a private investigator while Dante is a detective with the PCPD, but they have collaborated on cases.

In the meantime, Dante is walking into Jordan’s office at the Port Charles Police Department requesting updates on Ava Cassadine’s (Maura West) case. At some point later, they will go together to investigate a crime scene that’s a little too close to home for Dante.

But for now, they talk about Ava’s case and progress, if any, on it. They have their suspects but nothing forensically to bring in a suspect. There are some persons of interests, but not enough evidence to issue any warrants.

Back at GH in Ava’s room in the intensive care unit, Ava has requested to talk to Nikolas, who has a question for her. He says to her, “you believe in me, don’t you”.

What she believes regarding him may be totally opposite of what he thinks; after Elizabeth Baldwin’s (Rebecca Herbst) confession that she wasn’t with Nikolas the whole time when Ava was attacked. She’ll ask him if he tried to kill her, and Nikolas should be dismayed over that question.

Sonny tells her she can rely on Brando always and she has nothing to fear concerning the guardianship. Brando had promised her he wouldn’t let it go on any farther than it possibly had to.

Little do they know at that moment that Brando may not live to be relied on, although there’s a slim chance he might survive. If he does, he’s likely to be down for the count for a while

Outside Charlie’s Pub, where Brando had a suspicion after Josslyn Jacks (Eden McCoy) followed Dex Heller (Evan Hofer) out with his sunglasses, she barely missed the hook killer. Even though Ava’s attacker hasn’t actually succeeded in killing anyone yet, the name seems to fit.

Brando is alarmed to see someone with a black gloved hand coming at him with a baling hook – the same weapon used to attack Ava though police don’t know it yet.

Brando ducks as the attacker comes at him, and although he looked shocked there didn’t seem to be a hint of recognition. It seems as if it could be Dex, but the attacker is probably masked.

Royal Family News: King Charles Has His First Viral Moment – And It’s Not A Good One

Days Of Our Lives Spoilers: No Happily Ever After For Xarah