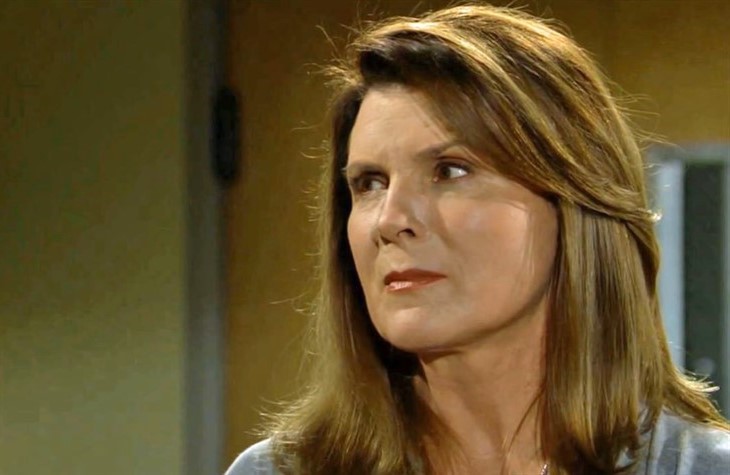 The Bold and the Beautiful spoilers show that Sheila Carter (Kimberlin Brown) has been especially crazier lately and her insidiousness knows no bounds. From breaking and entering to actually holding her grandson in her arms, while dressed as another person and with John ‘Finn’ Finnegan (Tanner Novlan) in the other room!

Things are continuing to get weirder as even Deacon Sharpe (Sean Kanan) is telling her that he “understands” where she is coming from and how hard it must be. Deacon, are you kidding me? She literally shot Finn and Steffy Forrester (Jacqueline MacInnes Wood)! I don’t think she has any care in the world for their well-being.

The Bold And The Beautiful Spoilers – Sheila Carter Breaks In!

At first, we thought Sheila was crazy when she showed up in public at Deacon’s workplace, but things get even wilder as she broke into Finn’s home and held Hayes in her arms while he was in the other room on the phone. For a moment, it looked like she was even considering kidnapping Hayes as she looked back at the door!

While she ended up putting him back down in the playpen and leaving, it left many of us wondering if she would be going back for Hayes and kidnapping him from his parents. At first, I would have thought this was too crazy, even for her, but now, anything is possible.

If she were to go back and kidnap him, I think this is where Deacon may finally step up and say something. Though, at this point, he might end up going along with the idea and thinking that it’s incredible how much Sheila cares about her grandson and that she would kidnap him from his parents.

Seriously, that is how Deacon has been thinking lately on The Bold and the Beautiful and it is kind of insane. I wonder what her next plan would be if she took him. Would she continue to just hide out at Deacon’s with a baby that everyone is looking for or would she try to skip town?

Let’s hope we don’t have to find out and someone catches “Lina” before she does anything insane or ‘Ms. Doubtfires’ her way into Hayes’ life.

What do you think? Will Sheila cosplay as Lina some more to roleplay as a nanny or will she just kidnap Hayes and save herself the time? Is Deacon heading back to prison for his trouble? Let us know in the comments below.