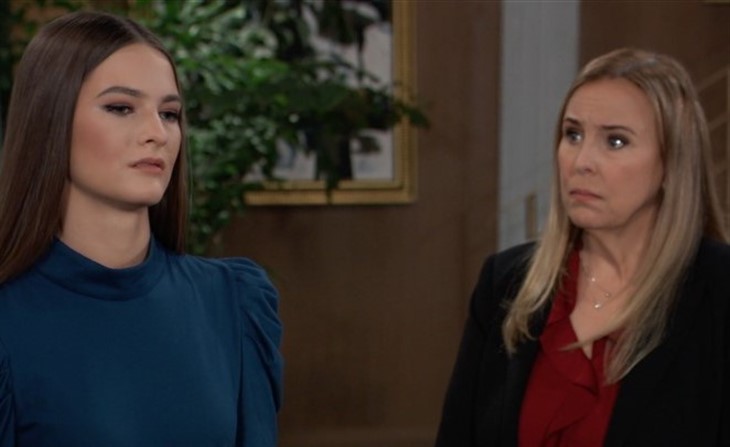 General Hospital Spoilers tease that Mayor Laura Collins (Genie Francis) has opened up her home not only to her grandson Spencer Cassadine (Nicholas Chavez) but his girlfriend Esme Prince (Avery Kristen Pohl) as well. It was one thing to let Spencer stay with her while he is on the outs with her father, Nikolas Cassadine (Marcus Coloma) but to let his girlfriend stay there as well, in separate rooms took a lot of goodwill on Laura’s part. Especially since Laura is privy to some of the things that Esme has done.

While Spencer and Esme were still actively stalking Ava Jerome (Maura West) in the hopes she would leave Nikolas, Esme took things to a dangerous level. She actually set fire to Ava’s car. Not only that but she planted the hospital ID badge of Ava’s murdered daughter at the scene of the crime. That’s a level of cruelty that paints a picture of Esme as being quite dangerous. Laura is aware of what Esme did, but because of her connection to Spencer, she let the young woman stay with her anyway.

But Esme hasn’t stopped there. She is also the person who recorded and uploaded the video of Cameron Webber (William Lipton) and Josslyn Jacks (Eden McCoy) having sex. These actions are likely because of another of Esme’s secrets. She is Ryan Chamberlain’s (Jon Lindstrom) daughter. Ryan has a reputation as being one of the most deadly killers Port Charles has ever seen. And although the circumstances are still unclear, the apple didn’t fall far from the tree. Once Laura finds out about Esme’s role in the video, as well as her connection to Ryan, look for any good will toward Esme to vanish!

General Hospital Spoilers – Laura Collins Will Make It Clear That Esme Prince Is No Longer Welcome!

Once Laura gets all the facts, she will make sure she lets Esme know exactly what she thinks of her. She’ll be furious and will want to make sure that no only is Esme out of her house, but as far from her beloved grandson as possible. But Esme may still have a trick or two up her sleeve, especially if she really is pregnant with Spencer’s baby!

How long will Laura’s good will toward Esme last? Will Esme’s crimes be revealed for all to see? And is Esme actually pregnant? Anything can happen in Port Charles so stay tuned to General Hospital airing weekdays on ABC. And don’t forget to check back right here regularly for all your General Hospital news, information and spoilers!