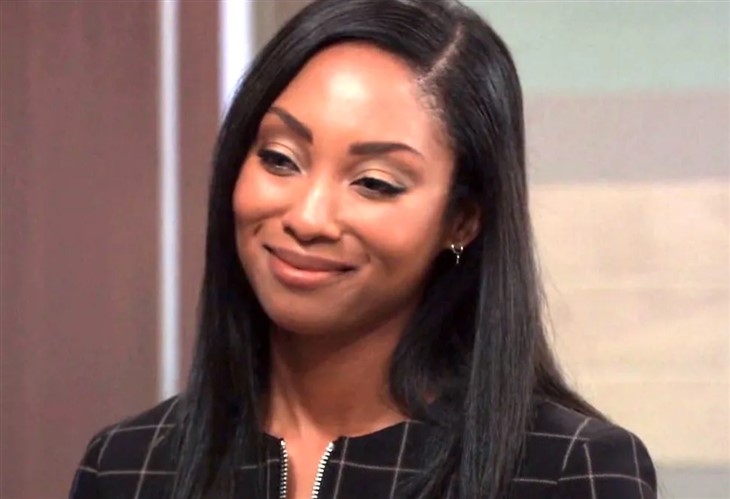 General Hospital (GH) spoilers tease that Jordan Ashford (Tanisha Harper) may believe she is divorced from Curtis Ashford (Donnell Turner) but that hasn’t stopped her from being concerned about his well-being. She is worried about Curtis’ partnership with Selina Wu (Lydia Look). Truthfully, Jordan still has feelings for Curtis and would love to have him back. But Curtis is currently involved with Dr. Portia Robinson (Brooke Kerr) and they are very happy together.

Although Curtis didn’t give Jordan the details, he made an agreement to allow Selina to hold high-stakes poker games at Curtis’ nightclub. Selina is an associate of Sonny Corinthos (Maurice Bernard) meaning that she is in the mob. Jordan is keeping watch in her downtime just to make sure there is no trouble. So far, Selina has kept the agreement that there would be no illegal activities in association with the poker games, but that could change at any moment.

Neither Curtis nor Jordan knows that they are not actually divorced. Although Jordan signed the divorce papers and put them in her outbox, Curtis’ meddling aunt Stella Henry (Vernae Watson) stole the papers. And even though she had a change of heart, Stella had a stroke and the papers were ruined by an overturned glass of water. Stella doesn’t remember taking the papers so even she is unaware that Jordan and Curtis’ divorce was never finalized.

General Hospital Spoilers – Jordan Ashford May Have Information That Could Break Up Curtis Ashford And Portia Robinson!

Jordan and Portia almost died after being locked in a room with a gas leak. As their oxygen began to deplete, Portia revealed that she needed to tell her daughter Trina Robinson (Tabyana Ali) the truth about her father. Portia later dismissed the comment as something she said because she was oxygen-deprived.

But the truth may be something far more important. Portia and Curtis were involved years ago and although she has denied it, there is every chance that Curtis is Trina’s biological father, not Marcus Taggert (Real Andrews). If that’s the case and Curtis finds out, it could end their relationship. That may be all that Jordan needs to reconcile with Curtis!

Can Jordan keep everything at the Savoy on the up and up? When will Jordan and Curtis discover they are still married? And could Portia’s secret send Curtis right back into Jordan’s arms? Anything can happen in Port Charles so stay tuned to General Hospital airing weekdays on ABC. And don’t forget to check back right here regularly for all your General Hospital news, information, and spoilers!