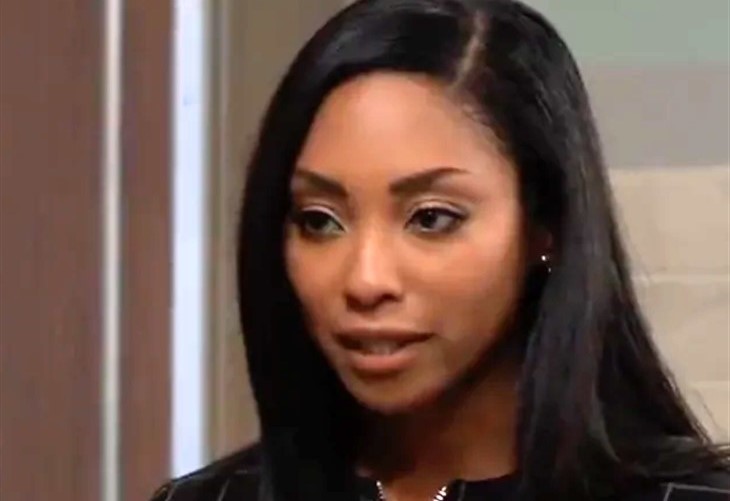 General Hospital viewers will see Jordan and Dante discussing a development in the case against Trina Robinson (Sydney Mikayla) at the Port Charles Police Department as Jordan tells him that’s as close to a smoking gun as the assistant district attorney is going to get!

Dante asks her where does she want his gut to start looking for more evidence and Sam asks how she can help. When Dante gets home General Hospital viewers will see Sam trying a little too hard to help Dante later in the week.

As Trina looks nervous at the Jerome Gallery, Ava Cassadine tells Trina that she needs to discuss some ground rules, and while viewers know Ava is on her side, she may be concerned about Trina’s growing notoriety.

Trina’s charges for videotaping Josslyn Jacks (Eden McCoy) and Cameron Webber (William Lipton) having sex and uploading it to the internet are getting a lot of press, and Ava may advise her to lay low for a bit instead of doing her usual job!

GH Spoilers – Spencer Cassadine Needs To Get Out

General Hospital viewers will remember things have been very tense between Spencer and Esme Prince (Avery Kristen Pohl) who have recently moved into Wyndemere Castle after his father Nikolas wanted to give Esme a safe haven.

Spencer and Esme are technically broken up, but she has been begging him to come back to her – this may be his answer, as he tells her he has to get out of there!

Meanwhile, Nikolas appears to be at the offices of The Invader, where his aunt Alexis now works and she tells him that he is full of surprises as usual!

The big question is why he needs to talk to her – she is no longer a practicing attorney, but that doesn’t mean she may not answer some legal questions for him, considering his marriage may be going sideways over Esme living at his house!

General Hospital viewers will remember that even though she didn’t want to have to start a court battle for visitation with her grandson Wiley Corinthos, (Viron Weaver) she has been forced into it by Michael Corinthos (Chad Duell) and Willow Tait, (Katelyn MacMullen).

General Hospital viewers will recall that Michael and Willow have been extremely uncooperative and closed to the idea of Nina being any part of Wiley’s life at all, and if Michael has his way, there will be restraining orders against her! Michael paid off freelance reporter Grant Smoltz (David Lautman) with a promise of five exclusives about all the dirt on Nina, who being the owner of Crimson Magazine will be big news!

This only adds to Nina’s troubles for her court challenge and she tells them she didn’t want a fight, but she knows how to end it! Later Carly asks someone, possibly Willow, who she’s going after next, presumably talking about Nina!

DOOL Spoilers: Gwen And Leo Motivated To Marry The Ones They Love