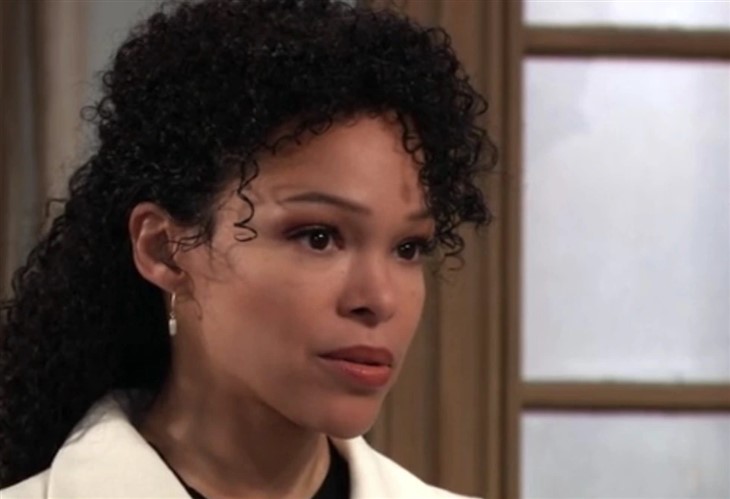 Outside Kelly’s, Spencer encounters Portia, and stops her, trying to apologize; he tells her that he is sorry for what Trina and her family are going through. Spencer tells Portia that he hopes that this is all over soon; of course, neither Portia nor Trina know that he is trying to find proof to exonerate Trina. Spencer’s apology hits her mother as phony and it gets on her last nerve, and she lays a strong reality check on him as he only means to apologize.

Portia raises her voice, obviously very upset and tells Spencer that this will never be over for Trina, wanting to make a very strong assignment of guilt to him! She goes on, saying Trina’s name will be attached to this horrible act for all of eternity, and her arrest record will follow her around forever!

Portia continues to rant, telling Spencer that now the school is getting ready to expel Trina, undoubtedly because her criminal case is all over the news. Portia rants that the impending expulsion from school is only the lesser of two evils; considering the other option is prison time Spencer interrupts her rant. Spencer puts on his best compassionate face and tells her he knows how hard this is for her. She blasts him, saying he has no idea, and puts the guilt trip back on him, saying “look at you – you are actually guilty and your family bought you a slap on the wrist!” Spencer interrupts again and tells Portia that he did go to prison.

General Hospital Spoilers – Don’t Get Started With Her..

Portia then vehemently tells Spencer don’t even get started with her, as if thirty days in a minimum security prison was prison time! She continues her increasingly angry rant, as Spencer hangs his head and looks ashamed; she starts blasting him for his privileged upbringing next, which she apparently considers his greatest sin! She tells him he’s back, he’s there, he’s got his trust fund, he’s got his island, and he’s got his family name, which apparently gets him out of everything!

Portia continues her guilt trip combined with reality check to Spencer, saying Trina has none of that, and does he understand this? Portia lets loose that this is ruining Trina’s life, and it’s all because of him, because of him and his awful girlfriend!

Previous General Hospital episodes revealed that of course Spencer knows that all the trouble Trina is in now is because of his awful girlfriend! His eyes have finally been opened and he sees Esme Prince (Avery Kristen Pohl) for what she really is, and knows she framed Trina, he just has to get the proof! That is what the problem is – Trina’s family, and even Port Charles Police Commissioner Jordan Ashford (Tanisha Harper) knows that Esme framed Trina, but they need proof! Spencer recently snooped in Esme’s room and found the pill bottle – prescription label torn off – of the opioid pills she used to drug Trina that night at the cabin. But that won’t prove she did anything because Trina never got tested – she just thought the hot toddy was too strong because she doesn’t drink!