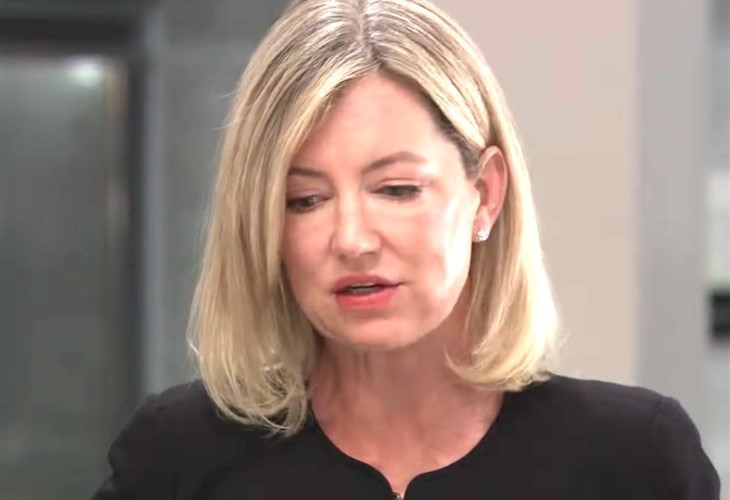 General Hospital spoilers and updates tease in this week’s GH Sneak Peek, snide remarks and catty conversation are the buzzwords of the day at the Metro Court Pool!

At the Metro Court Pool on the rooftop of the Metro Court, Nina Reeves, (Cynthia Watros) who’s ready to take a dip in the pool pays catty compliments to the staff! Olivia Quartermaine (Lisa LoCicero) stands by as Nina tells her she has to compliment to her that the pool staff has incredible manners, implying that Olivia herself, not so much. Nina continues to throw barbs at Olivia, telling her that perhaps she should take some lessons from her waiter, who Olivia quickly dismisses and says she’ll take it from there!

Olivia chastises Nina, telling her that while this may indeed be the nicest pool in town, there are others! Then she wonders out loud to Nina why she would choose to be in a place where she is not wanted?

Nina seems more like maybe she’s giving Olivia “the business” as she reminds her how much business she gives her as co-owner of The Metro Court. Nina reminds Olivia that the offices of Crimson Magazine are there, plus she runs up a sizeable restaurant tab when she meets someone for business, which she is doing today! Olivia interrupts Nina mid-sentence and tells her to cut the crap – she knows she’s only there to stick it to Carly Corinthos, (Laura Wright). Olivia then informs Nina that Carly is not only her business partner, but she’s one of her best friends, not revealing Carly put up her half ownership to buy Aurora stock. Olivia then continues her chastisement of Nina, advising her if she was her, she’d—then they are interrupted by Sasha Gilmore Corbin (Sofia Mattsson).

Sasha advises Olivia that she invited Nina as her guest to join her there at the Metro Court Pool, and she’s clearly offended by Olivia’s cattiness and snarky behavior. Sasha tells Olivia that if Nina is not welcome there, then neither is she – and as the face of Deception Cosmetics, whose headquarters are upstairs, that’s a pretty big deal! The two will continue to make the point that their companies make The Metro Court a lot of money, and maybe Olivia shouldn’t be so rude to her customers!

Olivia is showing her offense at the woman who stole Carly’s husband Sonny Corinthos (Maurice Benard) who is also the father of her son, Dante Falconeri (Dominic Zamprogna). Olivia is clearly on Carly’s side in that battle, which seems to never end, and soon Willow Tait (Katelyn MacMullen) will also show up!

Things will take a turn when Willow shows up, and even though Wiley Corinthos (Viron Weaver) has thus far not been a topic of conversation, Willow will make him one! Willow looks livid in the daily General Hospital preview for Monday, June 27 as she tears into Nina and shouts “leave Wiley out of this”! It looks like the four of them will continue to push each other’s buttons. Catty conversation could turn into a four way catfight if the claws come out!