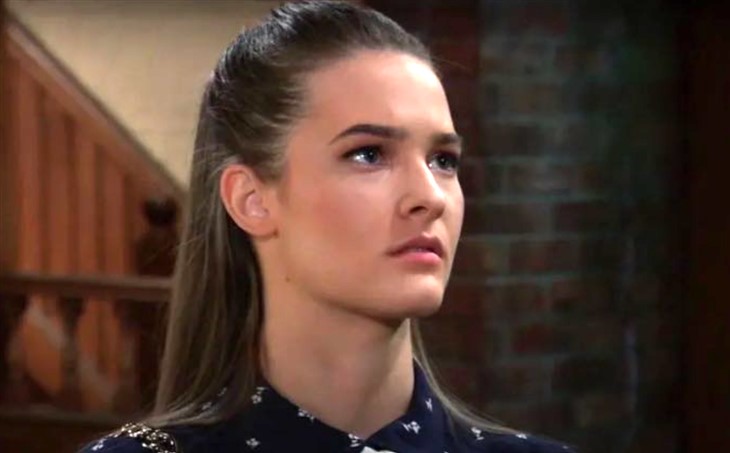 General Hospital spoilers and updates tease that Esme Prince (Avery Kristen Pohl) finds herself foiled in an upcoming episode of General Hospital, and of course she doesn’t like it at all!

General Hospital viewers will recall that right before Peter August (Wes Ramsey) escaped custody with the help of Victor Cassadine, (Charles Shaughnessy) that Spencer Cassadine (Nicholas Chavez) began his short prison term at Spring Ridge. Esme decides to pay “Spence” a Valentine’s Day visit, thinking it will be a pleasant visit and a surprise for him, but General Hospital viewers will see the visit isn’t what Esme hoped or planned!

Spencer seems much more interested in knowing how Josslyn Jacks, (Eden McCoy) Cameron Webber, (William Lipton) and in particular Trina Robinson (Sydney Mikayla) are, and if she’s heard from them than he is in seeing Esme! Esme’s hackles really rise when he wants to know if any of them have asked about him or how he is, since they haven’t come to see him-he wants to know about his friends when she is right there! She is feeling like she has become persona non grata in Spencer’s life!

General Hospital viewers will recall that Esme has had quite the “friendship” with Ryan Chamberlain (Jon Lindstrom) but when she goes to see him, she finds out Kevin Collins (Jon Lindstrom) has put the kibosh on her visits to Ryan! General Hospital viewers will recall that at least for the time being, Esme is living with Kevin and Laura Collins (Genie Francis) and she’s already on thin ice with Kevin.

Kevin, as a psychiatrist, is seeing through Esme’s façade and sees her unhealthy obsession with his evil twin, and Esme doesn’t like Kevin’s psychoanalysis of her one little bit – he’s already figured quite a bit out and she has to tread very carefully. Esme’s whole reason for seeking an internship at Spring Ridge wasn’t for her psychology class or towards her degree, but to have up close and personal access to Ryan Chamberlain! Esme is slowly realizing that no matter how much psychology she has learned that she can’t shrink a shrink and not be seen through!

General Hospital viewers will see Kevin show up during Esme’s visit to Spencer at Spring Ridge, and her attempted visit to Ryan, and he explains to Esme and Spencer together how dangerous that his brother really is. General Hospital viewers will see Esme attempt to explain again that she’s only interested in observing Ryan for her psychology class, which Kevin isn’t buying and it doesn’t seem like Spencer is either.

Esme is really upset that now because of Kevin, Spencer knows that she has been visiting Ryan while at Spring Ridge too, and he hadn’t known that previously; “ Kevin warns both of them that Ryan is much more dangerous than he seems. Now Esme must be very careful to not show how upset she is that a relationship she desired, with Ryan, more than anything on earth, has been hindered!