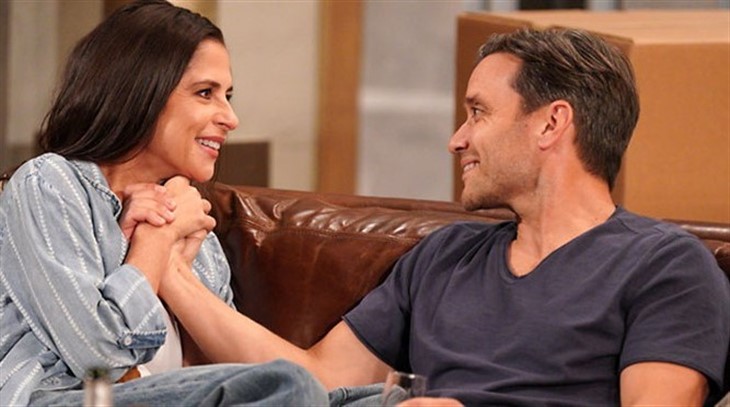 Before an explosion abruptly stole Lulu from Dante and her children on General Hospital, she knew Dante was the man she loved. Despite all of Dustin Phillips’ (Mark Lawson) good intentions and how she felt about him before Dante had come home from the WSB facility, Lulu ended up feeling like Dustin was an amazing place card for the real love of her life.

Fortunately for Dustin, he died not knowing how Lulu really felt. Unfortunately for Dante, Lulu collapsed right after uttering her feelings for him under her breath—words Dante didn’t get to hear. The entire time Lulu has been in an indefinite coma, Dante has been under the assumption she had moved on. In his mind, she wasn’t an option for him anyway.

What will happen when Lulu wakes up? How will she process Dustin’s death? Will she gracefully step to the side of Dante’s new relationship with Sam as Dante did for Lulu and Dustin, or will she tell Dante how she feels right away?

Recently, Dante suggested that he and Sam move in together, kids and all. Sam hesitated, knowing she would be moving into what is Lulu’s space in Rocco Falconeri’s (Finn Francis Carr) eyes, Dante’s son with Lulu. But Dante had a better idea; he wanted him and Rocco to move into Sam’s place, and so they did.

What Dante wasn’t expecting was an offer on the home he shared with Lulu the very day he moved out of it. The real estate market has been booming during Covid even in the Covid-free land of Port Charles! Sam noticed his hesitation and nervousness when his neighbor called with the offer, and as any good woman would do, she supported Dante and told him he didn’t have to decide right now. But he will have to decide soon, and letting go of his home with Lulu might indicate to Sam that he’s really ready to move on. But is he?

Dante’s love for Lulu didn’t die, but it’s been on suspension for some time now. Are you ready for Lulu to make a comeback? Word to the wise: don’t expect an explosion like the one on the

Floating Rib. This heartbreak will be slow burning, but it’s coming. Dante is a good guy who likes to do the right thing, but deciding whether that means living up to his word with Sam, or setting her free because he still loves Lulu remains to be seen.

Check back with us daily for more highlights of what’s happening with Dante and Sam.