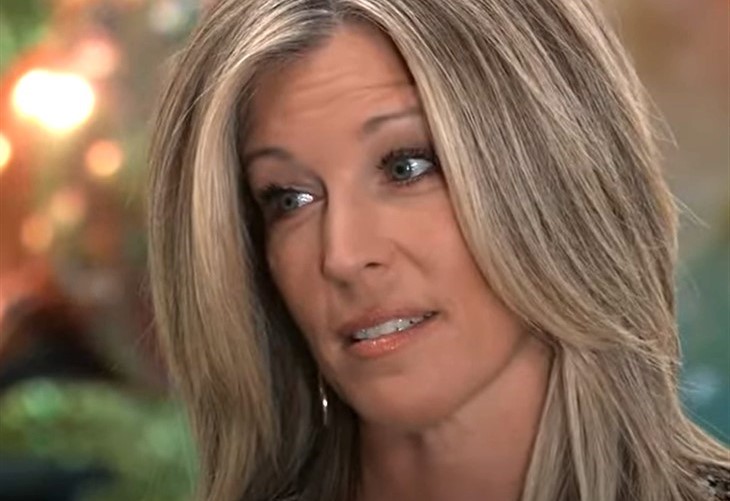 General Hospital spoilers and rumors tease that Carly Corinthos (Laura Wright) learns the truth about Willow Tait’s (Katelyn MacMullen) birth mother during the visitation hearing! Carly will get a call about the DNA test results, and Nina Reeves (Cynthia Watros) will disappear shortly thereafter – will a connection be found in a future GH episode?

In spite of that deathbed confessions are usually true because the dying person wants to clear their conscience, Carly hopes against hope that Harmony Miller’s (Inga Cadranel) was a lie! Carly doesn’t want Willow connected in any way, shape, or form to Nina Reeves, because if she is, that means her son is hooked up to Nelle Benson’s (Chloe Lanier) twin! Carly cannot get past that connection of Nelle to Nina and won’t be able to get past a connection to Willow if it’s true.

Willow and Nelle couldn’t be any more different and she’s nothing like Nina, but if she finds out she might bond to Nina! And if Willow’s bonded to Nina she will let her have access to Wiley Corinthos (Viron Weaver)!

It seems like Carly’s main hatred of Nina is her blood connection to Nelle on General Hospital, even though when Carly found out Nelle was her daughter she tried to spare Nina. Carly couldn’t fathom Nina wanting to find out Nelle was her long lost daughter but didn’t give Nina the option to decide for herself, she hid the facts. Carly couldn’t see past her hatred for Nelle, deserved or not, and when Nina did find out Nina held it against Carly, and that is how the feud began. It seemed at the point when Nina gave Nelle a decent burial not far from where Morgan Corinthos (Brian Craig) was buried Carly snapped! Carly transferred her hatred for Nelle to Nina, literally throwing Nina off Nelle’s grave and away from it, and breaking Nelle’s headstone in the process!

During Wiley’s visitation hearing, General Hospital spoilers show Carly gets the confirmation she’s been dreading. Harmony was telling the truth, and Willow is Nina’s daughter – NOT what she wanted to hear! Her worst fears could come true, and the judge is getting ready to make her decision soon – another difficult moment could be on its way because the judge seemed sympathetic! That judge SMILED at Nina way too much during the hearing and frowned during Michael Corinthos’ (Chad Duell) true and verifiable testimony proving Nina is a dangerous psychopath!

Carly never will understand the obvious friendship between Nina and Ava Jerome Cassadine (Maura West). Who can forgive someone who put you in labor and stole your child?

Nina disappears after the decision is rendered by the judge, which appears to be favorable since Carly, Michael and Willow have to take their time to process it. Sonny Corinthos (Maurice Benard) worries because he is unable to reach Nina, and something goes down that upsets Britt Westbourne (Kelly Thiebaud) at a Society Setups meeting that day. Britt wants Dante Falconeri (Dominic Zamprogna) to make an arrest – Nina is her cousin; Sonny makes a discovery, and Drew Cain (Cameron Mathison) approaches Carly, Michael and Willow. It certainly sounds like something untoward happens that day to Nina, and she’s found at the Society Setups venue where Drew also was – might Carly be responsible?