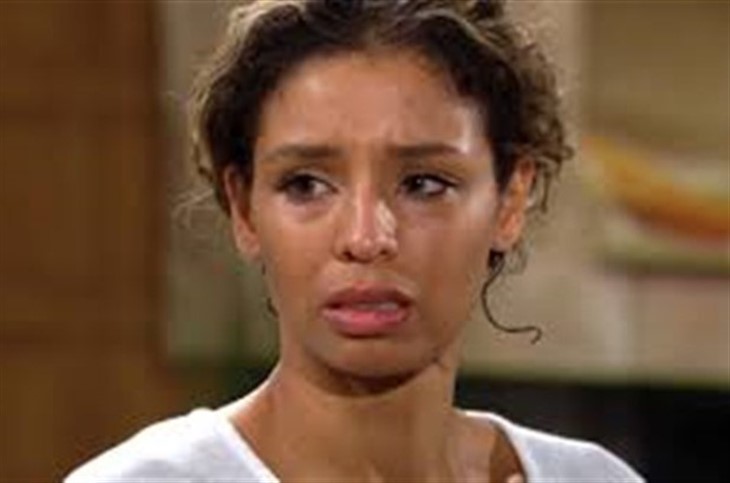 The Young and the Restless spoilers reveal that Elena Dawson (Brytini Sarpy) has had almost enough of her live-in boyfriend Nate Hastings (Sean Dominic).

Since Elena’s arrival in Genoa City, she’s been single for about 10 minutes. She’s either been with Devon or Nate. She’s gone back & forth & spoilers suggest she’s about to go back for more… from Devon.

Now that Nate has left the medical field altogether, let alone being the one managing Elena’s work schedule, they are totally out of sync.

Elena even had to miss the Chancellor-Winters Launch Party as she had to cover a shift at the hospital.

She & Nate can hardly catch one another, but guess who can… Elena & her ex-live-in-boyfriend Devon who lives across the hall.

Sharing space with her newfound sister Imani will not be an option. There is no doubt that Imani has at least one bag packed for when Elena & Nate break up.

Amanda Sinclair should best plan for flip-flopping herself… & that’s back to the Grand Phoenix. After all, she will need the support of her BFF that owns the hotel, Phyllis Summers (Michelle Stafford).

The Young And The Restless –  Spoilers – Nate Hastings & Imani Dominate In Bed & At CW, Watch Out Adam Newman & Sally Spectra…

Whether you like it or not, Nate & Imani are going to be the new hottest couple in Genoa City only to compete with Adam Newman (Mark Grossman) & Sally Spectra (Courtney Hope).

The hottest new couple will not be the only competition between these two up & coming couples, but business as well.

Though not the same driving motivation, both couples have it.

Devon took out Nate from performing medical surgery again. Imani is a hot little thing with a new law degree & an obsession with Nate Hastings who’s sure to be successful in whatever he takes on.

All of this heat is sure to drive Devon out of CW & back to the penthouse to spend time with Elena & his pseudo-son Dominic Newman-Abbott-Chancellor-Winters (Rainn and River Ware) per his recently installed custody agreement.

Are you excited about Imani & Nate getting together? What about Devon leaving Chancellor-Winters? Regardless, make a habit of swinging by here regularly for all of the Young and the Restless Scoop.