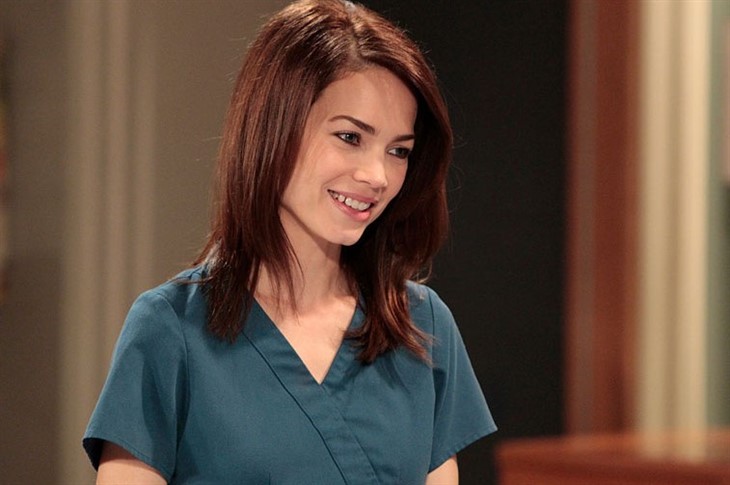 General Hospital (GH) spoilers tease that Port Charles, New York is heating up in the dead of winter thanks to the heat being brought by Cameron Mathison as Drew Cain. Drew is back from the dead and making all sorts of waves as he reconnects with the townsfolk and family he left behind.

Rebecca Herbst (Liz Webber) is just one of his daytime costars who is very glad to have the veteran actor on the canvas despite not having many scenes with the former All My Children star (Ryan Lavery).

When they finally had a scene together she had blast, telling Soap Opera Digest, “Oh my it was so much fun.” As it turns out the two actors have known each other for years, two dozen to be precise! They would see each other at industry events such as Super Soap Weekend though this is the first time they are working together.

She went on toe say, “It was such a a privilege to share scenes with him … I really hope that they continue writing the friendship between them.”

She went on to say about their scenes to date that they, “had a natural chemistry that felt good.”

“He is such a beautiful person inside and out, and it is so nice having him in the building. He brings this wonderful, warm, positive energy. He is … so sweet!”

With all of the positive vibes between these two actors one might think a romance would be in the air. Not so much. At the moment Liz is in the middle of trying to figure out her quirky relationship with Hamilton Finn (Michael Easton). To date they have been trying to get on the same page and yet weird things keep happening to disrupt their connection.

GH Spoilers – What Happens Next Between Fiz?

Some fans are speculating that it is actually Liz herself who is thwarting their efforts to hook up. Was she the one who brought her old wedding ring to work and put it in her locker? Could she have been the one who set fire to her dead husband Franco Baldwin’s (Roger Howarth, now Austin Gatlin-Holt) art studio?

Is Liz actually experiencing some sort of psychological issue, perhaps PTSD, DID or some other malady? Tell us what you think about Liz’s strange circumstances GH fans!