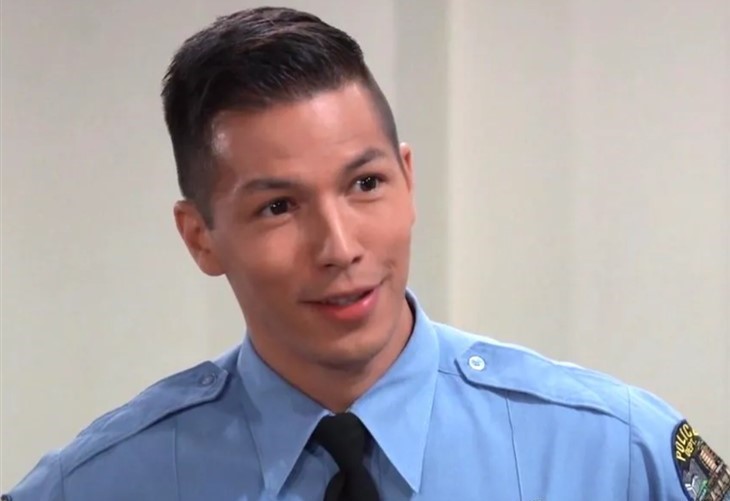 General Hospital (GH) spoilers for Wednesday, May 25 tease there are trials, tribulations and temptations for all the players in Port Charles on the next GH!

General Hospital Spoilers – The First Wrong I Plan On Righting

At the Jerome Art Gallery, rookie Officer Rory Cabrera (Michael Blake Kruse) is talking to Trina Robinson (Tabyana Ali), but this time he didn’t come to bring her a soda! However, he is clearly Team Trina with quite a bit of personal interest thrown in there besides, which never hurts when you’re coming up for trial!

Rory tells Trina that the first wrong he plans on righting is what’s happening to her, so he plainly believes that she has been framed!

Previous GH spoilers revealed that Trina was indeed framed – by Esme Prince (Avery Kristen Pohl) who drugged her the night that Trina spent at the Corinthos cabin.

She, Spencer Cassadine, (Nicholas Chavez) Cameron Webber (William Lipton) and Josslyn Jacks (Eden McCoy) were there when Esme set up a phone to record Cam and Joss having sex!

Spencer is still trying to find evidence to prove she framed Trina as well, but still hasn’t allowed Cam to tell either Trina or Joss.

General Hospital Spoilers – We Have To Pack

At Wyndemere Castle, Spencer is outlining the conditions that Ava Cassadine (Maura West) gave him to receive $10,000 allowance a week from his trust fund. That is plenty for any teenage boy to survive on and also his girlfriend that he’s playing and stringing along.

He tells Esme that they have to spend the afternoon packing but it’s a good bet that she won’t want to.

Ava had told Spencer that both he and Esme have to move out of Wyndemere Castle and stay out! Esme, however, wants to stay there so she can have access to Nikolas Cassadine (Marcus Coloma) and complete her plan of seducing him and breaking him and Ava up!

GH Spoilers – See How Easy That Was?

Meanwhile, Nikolas is at General Hospital trying to get information out of Britt Westbourne (Kelly Thiebaud) that she may not legally be able to give! It’s possible that Nikolas is onto Esme and wants to know about a pill he may have found, or more information about her wrist injury.

Apparently whatever he is trying to get out of Britt, he has been successful; he says, “See how easy that was”? He could also have been trying to find out if Esme is on birth control, considering that pregnancy scare a while back!

Ava is sitting at the Metro Court bar nursing a martini while Victor Cassadine (Charles Shaughnessy) tries to charm her! He asks her is there no welcome home for her favorite in-law? Ava smiles at him and it seems a bit seductively – is she being tempted away from Nikolas by the older Cassadine?

Victor has been out of Port Charles for several weeks now, so he has some catching up to do. The question is, what was he up to and is anyone trying to catch up to him?!

GH Spoilers – Why Should We Trust Your Judgment About This?

At the Port Charles Courthouse, all eyes are on Sonny Corinthos (Maurice Benard) as he takes the stand in behalf of Nina Reeves (Cynthia Watros) at her visitation hearing!

Attorney Diane Miller (Carolyn Hennesy) is usually on Sonny’s side, but not this time, as she asks why they should trust his judgment about this? Both Nina and Carly Corinthos (Laura Wright) are looking straight at him with Nina worried and Carly disgusted.

Michael Corinthos (Chad Duell) felt they had a slam dunk victory against Nina being allowed visitation of Wiley Corinthos (Viron Weaver). Can anything Sonny say change that and swing the judge over to Nina’s favor?