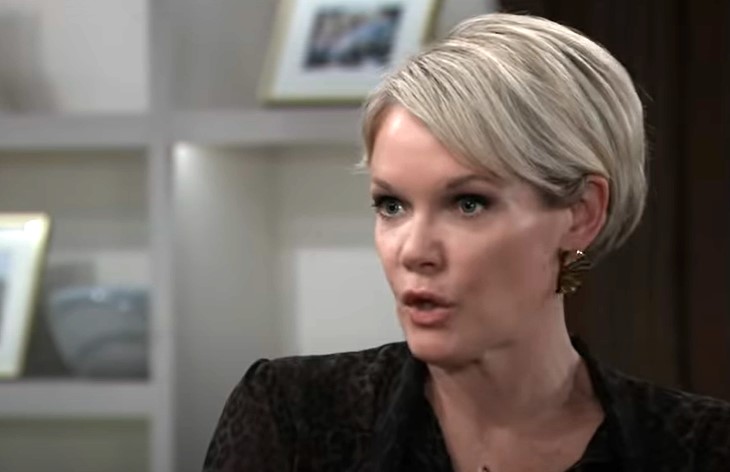 General Hospital (GH) spoilers and updates for Tuesday, May 31 tease there will be break ups and shake ups among the Port Charles residents on the next GH!

General Hospital Spoilers – You Know What They Say!

Ava and Nikolas had gotten into quite an argument at The Metro Court in a previous episode, with Victor Cassadine (Charles Shaughnessy) attempting to be the peacemaker! It’s obvious that Laura can tell that something has Ava upset and frustrated by the way she aims at her target!

Laura actually looks a bit shocked along with concerned as Ava tells her an old saying that she learned somewhere along the line in her past. Ava tells Laura, “you know what they say-practice the way you play!”

GH Spoilers – My Relationship With Your Son Is Over

Meanwhile, at Wyndemere Castle, Esme cries crocodile tears after spotting Nikolas day drinking, obviously pretty upset himself, having just come from The Metro Court and his intense argument with Ava!

Esme manipulates Nikolas, telling him that her relationship with his son, Spencer Cassadine (Nicholas Chavez) is over, hoping to hone in on his pain to “comfort” him! In reality, Spencer and she had also just had an intense argument and Spencer went for a drive to let Esme cool down a little bit before he returns.

She’s right about their relationship being over though, Spencer’s just stringing her along until he can get some proof she framed Trina Robinson (Tabyana Ali). Esme is hoping to get Nikolas in bed by the time Spencer and Ava return to Wyndemere!

At the Metro Court Pool, Sam McCall (Kelly Monaco) runs into Damian Spinelli (Bradford Anderson) and seems a little on the suspicious side as she asks, “What’s going on, Spinelli?”

Spinelli looks a little uncomfortable at that line of questioning from his former private investigations partner, but he does seem to have something to hide! Sam and Spinelli are at the Society Setups party along with many of their friends, including Drew Cain (Cameron Mathison) and Brook Lynn Quartermaine (Amanda Setton).

Spinelli was seen at a previous Society Setups event apparently dodging a date at The Savoy, and Sam may be concerned after his break up with Ellie Trout (Emily Wilson). He’s not the only one with romantic problems in Port Charles, however!

GH Spoilers – I Think We Both Know The Answer

At Terry Randolph’s (Cassandra James) office at General Hospital, she and Chet Driscoll (Chris Van Etten) continue to talk about their disintegrating relationship.

It’s plain to see that Amy’s plot has succeeded when she tells Chet she thinks we both know the answer to that! She is likely responding to Chet wanting to continue the relationship but Amy would make it impossible!

General Hospital Spoilers – This Should Make For An Interesting Party

Back to the Society Setups get together at the Metro Court Pool, Drew tells Brook Lynn, who’s sipping on a cocktail that this should make for an interesting party! Neither Drew nor Brook Lynn has any idea just how interesting, since GH spoilers also tease that Britt Westbourne (Kelly Thiebaud) will have a meltdown!

The cocktails will continue flowing and the guests will continue imbibing, but will the mix and mingle turn into a brouhaha before it’s over? It certainly sounds like it might, there might even be a party crasher that turns into a pool splasher!

GH Spoilers – The Hard Parts Of His Past

At the Port Charles Courthouse, the judge called for a short recess while she called Attorneys Scott Baldwin (Kin Shriner) and Diane Miller (Carolyn Hennesy) into her chambers.

Things were getting pretty heated and ugly as Nina Reeves’ (Cynthia Watros) visitation hearing continued, and Michael Corinthos (Chad Duell) is talking to Carly Corinthos (Laura Wright) about it.

His killing of Claudia Zacchara (Sarah Joy Brown) had been brought up and he tells Carly that Wiley Corinthos (Viron Weaver) will have to face the hard parts of his past.

General Hospital Spoilers – Nina Reeves Is Shaken Up As Willow Tait Reams Her Out!

Also at the Port Charles courthouse, Nina was on her way to have a cup of coffee with her aunt Liesl Obrecht (Kathleen Gati) when Willow grabbed her arm! Willow got up close and personal and in her face when she told her she wasn’t going anywhere, and that is a side of Willow no one has seen!

Now she faces Nina down and Nina is downright shaken up as well as scared at this fierce new version of Willow!

Willow is obviously upset about the comparisons of Nina to Nelle Benson (Chloe Lanier) that were brought up in court by Diane! She snarls at Nina, the apple didn’t fall far from the tree – oh, if she only knew she was the other apple that fell from that tree!