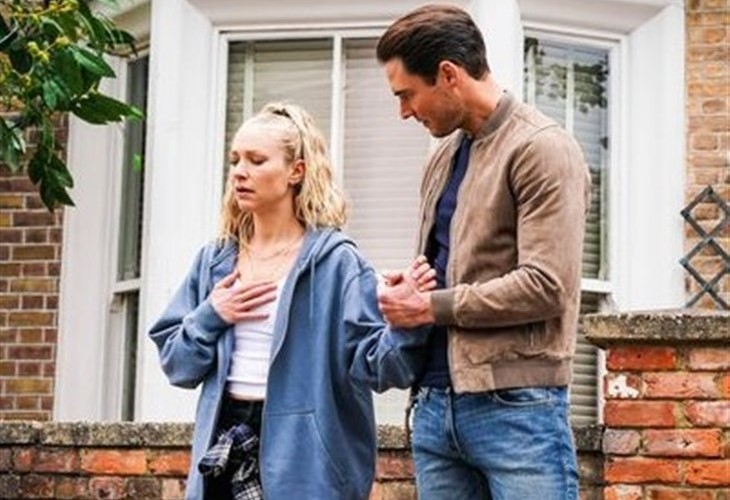 EastEnders spoilers and updates tease that Zack Hudson (James Farrar) and Nancy Carter’s (Maddy Hill) relationship will have to deal with some relationship problems. Their romance will “hang in the balance,” per the new teasers released later this month.

In upcoming scenes, Sharon Watts (Leticia Dean) will warn Zack about the way Nancy is treating him. Zack sweeps his sister’s concern under the rug. Later, he decides to sell his car and use the proceeds to fund their business. However, Nancy isn’t impressed.

Zack goes to the club to drown his sorrows together with Sam Mitchell (Kim Medcalf). The pair will get closer together. Is this the beginning of a new friendship, or will it develop into something more romantic?

Meanwhile, Sam is now the official new owner of the nightclub previously known as Ruby’s. She’ll make a huge decision by firing long-time employees, Dotty Cotton (Milly Zero) and Vinny Panesar (Shiv Jalota). What happened and how will the pair take her decision?
Peter Learns The Truth

Elsewhere, Peter Beale (Ben Hardy) finally learns who attacked him. It all starts when Kathy Beale (Gillian Taylforth) fires Lewis after learning that he assaulted Ben Mitchell (Max Bowden). Lewis is left furious after losing his job, so he decides to get revenge. He tells Peter that his own uncle was the one who attacked him.

Spoilers hint that Janine Butcher (Charlie Brooks) will start to worry when she learns that Linda Carter (Kellie Bright) has regained her consciousness following the car crash.

Fans may recall that Janine dragged Linda to the driver’s seat to make it look like Linda was driving the car when it crashed. As for the Carters, they’re also concerned about Linda’s condition. They’re preparing themselves for the possibility that Linda could end up suffering from memory loss or brain damage.

Meanwhile, Scarlett starts to suspect her mom, Janine, after seeing a cut on her head. The latter tries to come up with a lie to cover up her involvement in the car crash, but Scarlett will eventually put two and two together. Will Scarlett tell Mick Carter (Danny Dyer) what happened? Will Linda remember the car crash?

Days Of Our Lives Spoilers: Why Abigail Had To Die, Ron Carlivati Explains