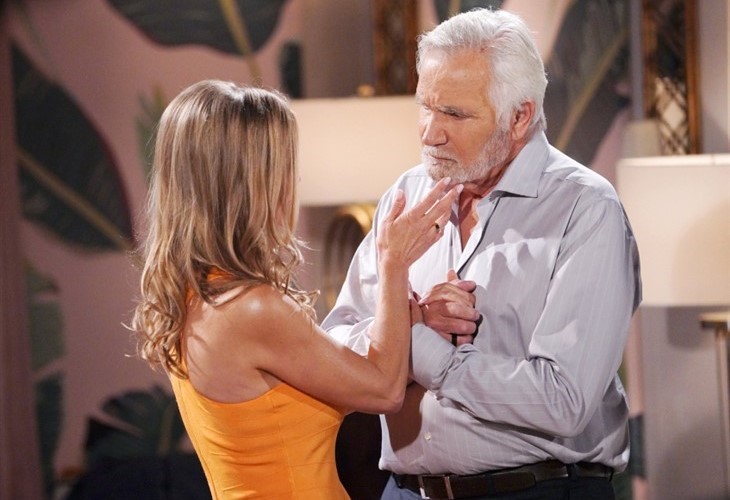 The Bold and the Beautiful (B&B) spoilers reveal Eric Forrester having to make up his mind between his wife and his mistress, but was this affair even the right thing to do? You tell us!

The Bold And The Beautiful Spoilers – Is Eric Forrester Right And Wanting Revenge?

Yes, Eric (John McCook) was hurt and devastated when he learned his much younger wife, Quinn Fuller Forrester (Rena Sofer), was having an affair with Carter Walton (Lawrence Saint-Victor) last year. He trusted both of them so much, but they both betrayed him. He even played head games with Quinn before finally telling her he had erectile dysfunction.

But the man still couldn’t make up his mind what he wanted. First, he wanted Quinn back, then he wanted Carter to make sure Quinn was sexually satisfied while she remained married to Eric, then he wanted that affair he sanctioned to be over and for Quinn to be true to him.

Since Quinn felt Eric was the person who changed her life and made her into a better woman, she was willing to go along on his little roller coaster and do whatever he wanted. Little does she know she’s been played for a fool for months as Eric has his weekly meetings in bed with Donna Logan (Jennifer Gareis) while Eric tells Quinn he is playing pickleball. But maybe Quinn deserves what he is doing to her considering her own affair and the way she lied to Ridge Forrester (Thorsten Kaye) just to stick it to Brooke Logan Forrester (Katherine Kelly Lang).

While there’s a case to be made that Eric is with the better woman for him, should he just come clean with Quinn and be with her completely, shutting Donna out once again. Donna was heartbroken when Eric fired her on Quinn’s orders last year, but Quinn was trying to protect the marriage that nearly broke when she had no idea why Eric didn’t want to sleep with her.

Eric also seems completely happy with Donna so why is he even bothering to stay married to Quinn? Why does he need both women? Some may argue that he doesn’t need them both and although he may seem to make up his mind, he is still going to go back and forth between his current wife and his ex-wife. Is Eric’s behavior wrong or does it serve Quinn right? Let us know in The Bold and the Beautiful poll below.