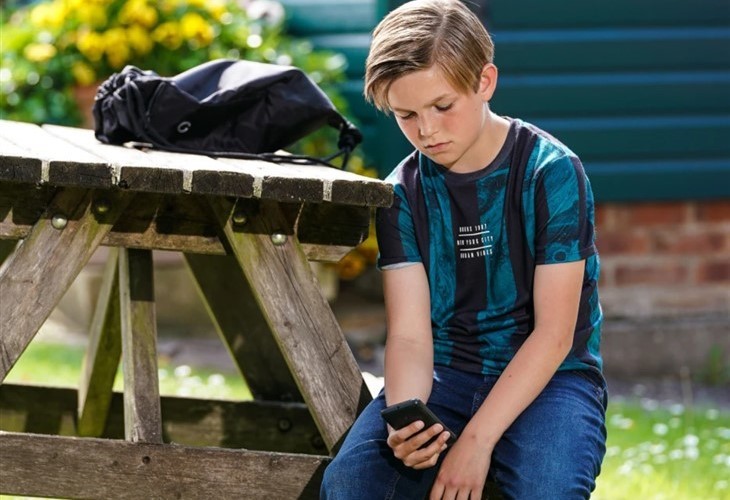 Eastenders spoilers and updates tease that Tommy Moon (Sonny Kendall) accidentally stabs one of his bullies in a shocking twist in his bullying storyline. Will he finally come clean to Kat Slater (Jessie Wallace) about his problem at school?

Fans may recall that Tommy has been tormented by some older boys at school after protecting his sister, Scarlett Butcher (Tabitha Byron). Phil Mitchell (Steve McFadden) even tried to intervene but the bullying still continued.

In the latest episode, Tommy feels more anxious after watching a video of him getting bullied. Things started to get worse after Isaac Baptiste (Steve Basaula) broke up the latest altercation that took place in the playground.

Later on, Tommy got lured into a trap. He brought a knife with him to scare his bullies. Things got out of hand when Sid took a cheap shot at Tommy when he turned to walk away.

Tommy threw the backpack, which had the knife in it at Sid. The latter gets accidentally stabbed in his shoulder. Things are bound to become more problematic for Tommy since one of the boys filmed everything.

When Tommy returned home, he once again denied everything when Kat asked him about the bullying. The latter even encouraged him to open up by saying that he can tell her anything.

Tommy said he was sorry but Kat reassured him that he had nothing to apologize for. Aside from his bullying problem, Tommy has kept another secret from Kat, the accidental stabbing of Sid.

How will she react when she finds out? Will Tommy find the courage to open up to Kat?

Fans may recall that The Panesar family has been doing everything they can to get Kheerat Panesar (Jaz Deol) off after assaulting Gray Atkins (Toby-Alexander Smith). They got into more trouble after Tej Bansal, Kheerat’s lawyer, advised him to plead guilty.

Fortunately, it was revealed that Tej was working with the Sharmas to get Kheerat in jail. Eve Unwin (Heather Peace) helped Kheerat in getting a new attorney and changing his plea to not guilty. In upcoming scenes, Kheerat will return home with a big smile on his face. He’ll tell his family that the charges against him were dropped.

Sister Wives Spoilers: Why Do Kody And Tony Padron Dislike Each Other?