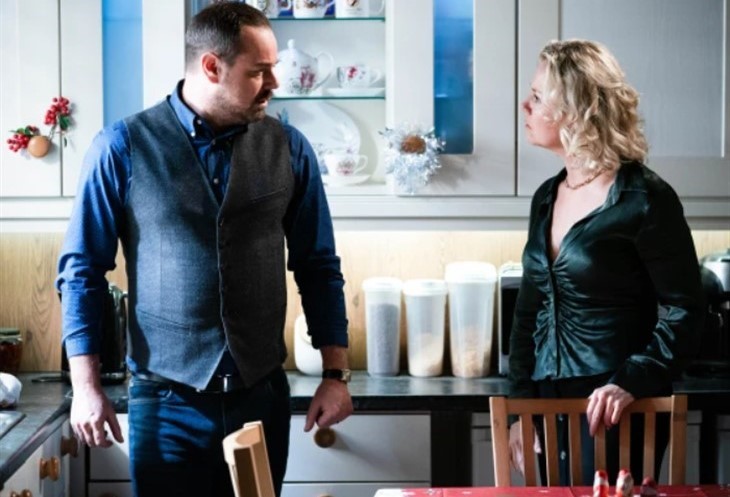 Fans may recall that Janine has been plotting to ruin Mick and Linda Carter’s marriage for months. She’s been scheming to seduce the Vic barman and it seems like she’ll finally get what she wants. The pair will cross the line after the truth comes out about Tina Carter’s (Luisa Bradshaw-White) murder.

The Carters are still struggling to accept the fact that Gray Atkins (Toby-Alexander Smith) murdered Tina and hid her dead body under the Argee Bhajee.

Last week, fans saw Gray finally get his comeuppance for all the crimes he has done in the past. Aside from Tina, he also murdered his first wife, Chantelle Atkins (Jessica Plummer) and Kush Kazemi (Davoood Ghadami). He even tried to kill his current wife Chelsea Fox (Zaraah Abrahams) and had a showdown with Whitney Dean (Shona McGarty).

In the latest episode, Janine took Mick out so they could talk about how he’s really feeling. She understands that Mick and his family are going through a lot ever since they learned about what really happened to Tina.

To encourage Mick to open up, Janine shared about her past, including the people she’s lost in her life. She has had her fair share of grief. She shared that her parents, grandmother, Pat Butcher, and three husbands all died on her.

She tells Mick that she understands how he feels because she’s been through the same. Janine admitted that she may not be able to fix Mick but she wants to help him get past the pain he’s feeling.

As the pair strolled the park together, Mick thanked Janine for being there for him during this tough time and for helping him get through everything that has happened in the past months.

Mick then got close to Janine and planted a kiss on her. But Janine unexpectedly pulled away and said that it was not the best time because they were both a mess. But before they parted, Janine managed to crack a joke and said that Mick was a good kisser, which made things a lot less awkward between the two.