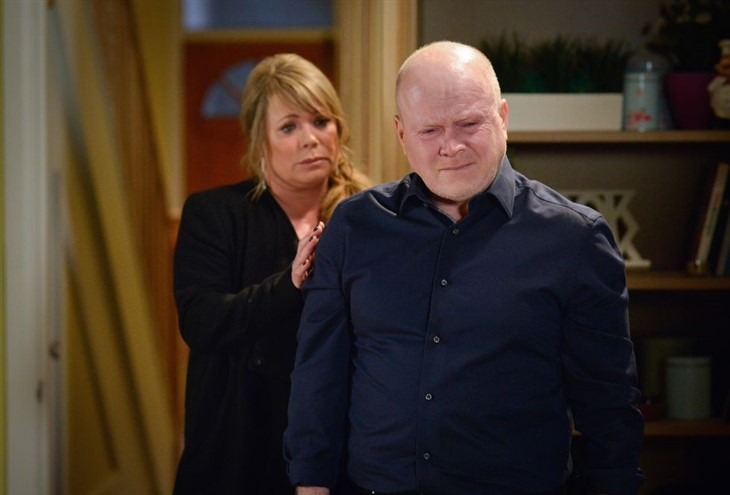 EastEnders spoilers and updates tease that Phil Mitchell (Steve McFadden) will dump Kat Slater (Jessie Wallace) next week and he’ll receive an ultimatum from Sharon Watts (Letitia Dean). Phil is facing life in prison but Kat doesn’t have a clue. Sharon finds out about it and demands that he tell Kat the truth or she will.

Fans may recall that Phil was forced to surrender to the police well before she could leave town and hide from the authorities. He learned from his lawyer that he may spend the rest of his days behind bars for his involvement in Vincent Hubbard’s (Richard Blackwood) death in 2018.

Kat knows that Phil will be spending some time in prison but she doesn’t know that he may be locked up for the rest of his life. She also doesn’t have a clue about DCI Samantha Keeble’s (Alison Newman) offer. Phil was given the choice, become an informant or go to jail for life.

If Phil rejects the offer, he’ll spend the rest of his life in prison. But if accepts it, he’ll go against everything he stands for. He only has 24 hours to decide and he’ll turn to Ritchie Scott (Sian Webber) for advice. Will he accept the offer and turn his back on his code or will he choose to stay in prison rather than becoming an informant.

As Phil plans to sell his business, he comes across Kathy, who will insist that he should focus on Ben Mitchell (Max Bowden). Meanwhile, Jean Slater (Gillian Wright) will ask Kat about Phil’s sentence.

Later on, Kat gets some alone time with Phil. She doesn’t want them to be interrupted so she puts Phil’s phone on silent. The latter soon finds out that he’s had a lot of missed calls and will be furious at Kat.

With the things going on and Phil’s inability to tell Kat the truth, he ends up breaking up with her without giving her any good reason.

Kat will be confused and Jean will also struggle to understand his change of heart. Kat then turns to Sharon, who instantly realizes that Phil may have a good reason for dumping Kat.

She pressures him to come clean and Phil eventually does. Sharon then realizes that Kat doesn’t know about his life sentence so she issues him an ultimatum. She wants Phil to tell Kat the truth. If he doesn’t, she will. How will Kat react when she finds out about Phil’s possible prison sentence?