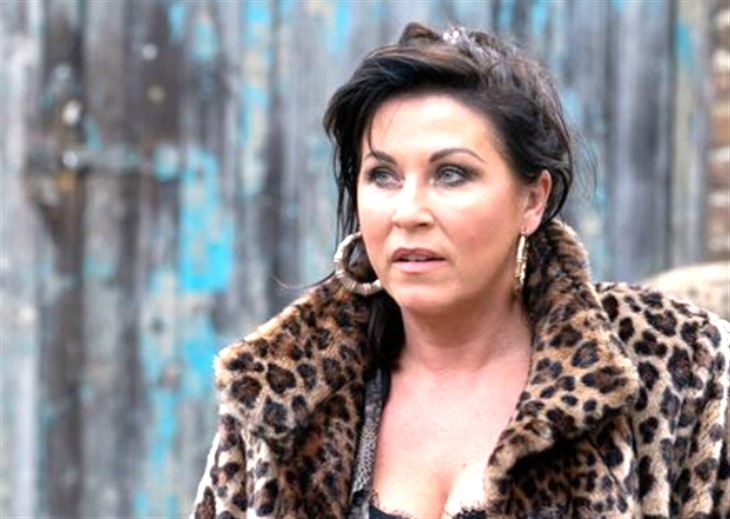 EastEnders spoilers and updates tease that Kat Slater (Jessie Wallace) will learn about Phil Mitchell’s (Steve McFadden) plan to take Raymond Dawkins and do a runner. Kat will try to talk some sense to him but will he listen? She makes this shocking discovery as Phil prepares to leave the Square temporarily to visit his Louise Mitchell (Tilly Keeper) in France.

In upcoming scenes, Phil will temporarily leave town to visit his daughter, Louise in France after her mum Lisa Fowler (Lucy Benjamin) suffered an injury. He’ll ask Kat a favor to watch over his house while he’s gone. Kat will be more than willing to grant Phil’s request. However, she’ll get something on her phone that will leave her distracted.

Elsewhere, Phil still has a disagreement with Denise Fox (Diane Parish) about their son, Raymond. Phil wants to take custody of him, which leaves Denise fuming.

Later on, Phil admits to Kat that he’s thinking of taking Raymond and leaving town. Kat is horrified and will try to convince Phil to rethink his plan and she even asks Denise to let Phil see his son. Will Denise agree or will Phil be forced to proceed with his plan?

Phil is not only having problems with his custody battle for Raymond. He’s also facing problems with Ben Mitchell (Max Bowden). His older son is dealing with monetary problems that will leave him in danger, soon. Next week, Callum Highway (Tony Clay) and grandmother-in-law Vi (Gwen Taylor) will see Ben being threatened by a loan shark.

Later on, Ben notices his father as he prepares to leave for France. He’ll explain his predicament and ask for help. However, Phil will refuse to lend him a hand. Ben’s financial problems will spread across town as Vi starts to gossip about it. Kathy Beale (Gillian Taylforth) and Kheerat Panesar (Jaz Deol) will also learn about it. What will Kheerat do with the information?

Phil also insisted that she should allow her son to take part in it. She eventually gives Phil permission to bring Tommy to the tryouts after running into Kim Fox (Tameka Empson), who boasted about her daughter’s abilities.

90 Day Fiance: Anny Francisco Celebrates Birthday Ahead Of Due Date