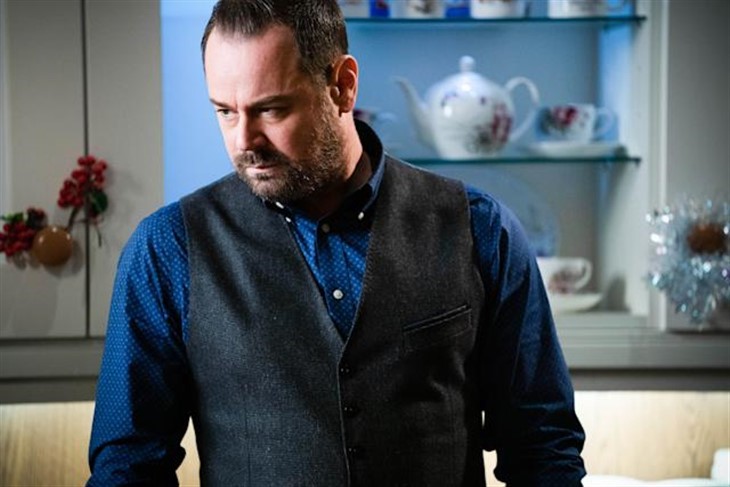 EastEnders spoilers and updates tease that Mick Carter (Danny Dyer) will make a shocking decision involving his relationship with Janine Butcher(Charlie Brooks) following Linda Carter’s (Kellie Bright) return to Walford. Did he make the right decision or will he regret it later on?

In the episode set to air on April 4, Mick’s estranged wife, Linda will return to the cobbles. Linda’s comeback is no longer secret thanks to photos that were leaked showing that she’s present at Tina’s funeral.

Linda will come back for Tina Carter’s (Luisa Bradshaw-White) funeral. Linda and Mick haven’t seen each other for months so things will be awkward between the two of them. Before the service at the crematorium, the pair will start to argue about everything. Things turn from bad to worse when Nancy Carter (Maddy Hill) ignores Linda.

Linda is present at the crematorium when Shirley Shirley (Linda Henry) starts to give a beautiful eulogy for Tina. However, she gets distracted by Janine’s presence. She recalls that she was the one who told her to divorce Mick at Christmas.

She fails to support Mick when he breaks down while giving his eulogy. But Janine was there to do what she can’t. Linda feels furious and embarrassed. She storms out of the crematorium and gets into a confrontation with Nancy.

She’ll then turn to alcohol to drown her sorrows and cause a scene at the crematorium. Shirley is clearly unhappy with her behavior so she boots her out of the wake. Linda may not be welcome but Shirley is surely happy that Janine is there to support Mick during these trying times.

Linda is clearly drunk and all set to cause more cause at The Vic. Fortunately, Sharon Watts (Letitia Dean) is there and takes Linda home. She tries to explain to Linda that she needs a better plan if she wishes to defeat Janine. But Linda refuses to listen and goes to the pub, instead. She causes another scene and confronts Janine for telling her to divorce Mick.

Things haven’t been easy with Linda around and Mick is grateful for having Janine by his side. The pair shares a kiss but Mick pulls away and says that he wants to do it right. He’s made the decision to divorce Linda so they can be together officially and legally.

But his decision causes rumors and gossip to spread in the cobbles. Clearly annoyed with everything that’s been happening, Mick decides to kiss Janine in public. It’s his way of telling people that he and Linda are over and that he’s now with Janine.

Is this what he really wanted? Or will he regret his decision later on?

Days Of Our Lives Spoilers: Anna Arrested, Does She Try To Kill Sarah/Renee?