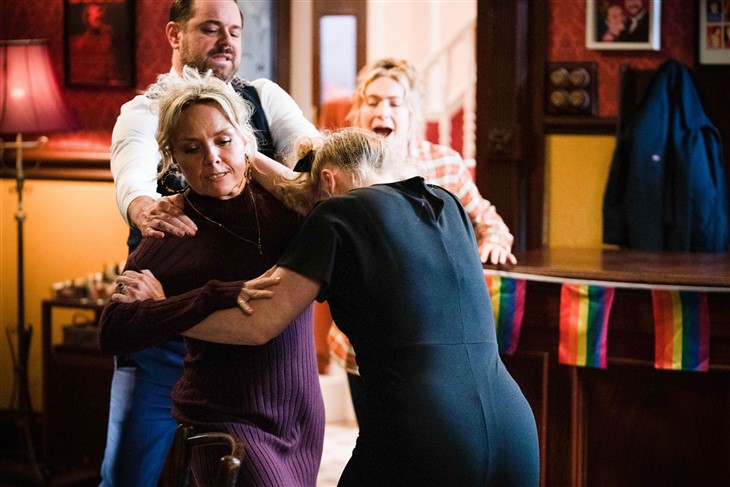 EastEnders spoilers and updates tease that Linda Carter (Kellie Bright) will confront Janine Butcher (Charlie Brooks) after an incriminating clue involving the car crash is revealed. Next week, Janine will panic as she fears that her secret may soon be revealed.

Fans may recall that Linda was left fighting for her life following a dramatic car crash with Janine. She thought that she was drunk and was responsible for the accident that took place.

She still can’t recall what really happened on the day of the crash since she was immediately rushed to the hospital when it happened. Now, she’s facing serious police charges because of that deception.

What she didn’t know was that Janine came to rescue her after Nancy Carter (Maddy Hill) left her. Viewers are aware that she placed Linda in the driver’s seat after the crash to make it look like she was drunk driving. Janine made sure there was no clue that she was there and disposed of her bloodied clothes.

In upcoming scenes, Linda will be worried about the outcome of her upcoming court hearing. She’ll share her concerns with Mick Carter (Danny Dyer), and her frustration quickly builds up when she thinks about getting separated from Annie.

Mick and Linda almost share a kiss, but they are interrupted by Jada Lennox (Kelsey Calladine-Smith). Later on, Mick will keep thinking about Linda while Janine struggles to catch his attention.

Mick wants to help Linda, so he encourages her to recall what exactly happened during the accident. The pair also checked the call log online and find out that Linda made a call to The Vic.

As Janine panics at the thought of her secret getting exposed, Linda starts to write future birthday cards for her kids in case she goes to prison. Later on, she discovers that Sharon Watts (Letitia Dean) knows who answered her call that night.

Linda wastes no time in confronting Janine about the call in front of Mick. Will Janine come clean as to what really happened?

Aidan O’Callaghan, who stars as Lewis Butler, confirmed that he’ll be leaving the show. The actor opened up about his time on the soap.

“In terms of the story, it’s a massive emotional week. As far as I know, this is Lewis’s last episode. But the door for me hasn’t been fully shut. I will just have to wait and see if my phone rings,” the actor shared.