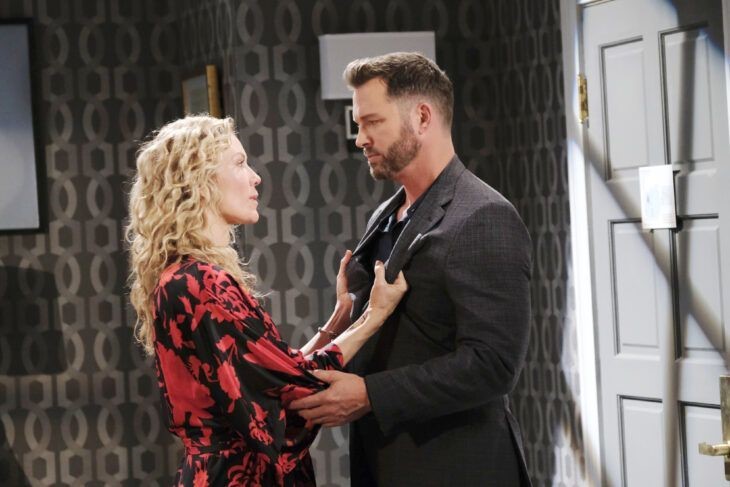 Days of Our Lives spoilers indicate that Kristen Dimera (Stacy Haiduk) has demanded that Brady Black (Eric Martsolf) bring their daughter home to her. Rachel Black (Finley Rose Slater) is off visiting her brother in California presently but Brady could get her home at any time. Should Brady bring Rachel home to see Kristen?

Days Of Our Lives Spoilers – Kristen Dimera Wants Her Child

Days Of Our Lives spoilers reveal that Kristen went to prison after turning herself in but was later granted a full pardon. Now that Kristen is out of trouble, she can have her daughter whenever she wants. After all, Brady doesn’t have any set custody agreement. Kristen ran off to stay away from the cops instead of warning her daughter she was leaving.

Brady knows that Kristen loves her daughter and Rachel loves her mom. However, Brady has reservations about their contact. It isn’t like Kristen hasn’t tried to steal their daughter once before. Unfortunately, as Chloe Lane (Nadia Bjorlin) pointed out, Kristen isn’t going anywhere without Brady now that she’s free.

Days of Our Lives spoilers show Kristen hasn’t always made the best choices as a mother. After all, Kristen stabbed Victor Kiriakis (John Aniston) for trying to keep Rachel from her. Kristen had no regard for her daughter when she chose to attempt to kill someone. Perhaps Kristen was a bit insane after Victor’s words at the time. However, Kristen needs to learn to think before she acts.

Brady may give in and allow Kristen to be involved in Rachael’s life. However, that doesn’t mean that Brady wants her in his. Brady loves Chloe and wants to make a life with her. Kristen may be trying to come between them but it’s not likely to work. Can Brady and Kristen co-parent while he is still with Chloe? Will Kristen continue to try to cause the couple problems?

Days Of Our Lives Spoilers – Can Brady Black Protect His Child?

Brady may be willing to let Kristen see their daughter and even have partial custody. However, can Brady trust Kristen not to go back to prison any time soon? Kristen has been on the run most of Rachel’s life. Rachel hardly knows her mother at all. Can these two bond before Kristen disappears from her life again?

Let’s face it. Kristen continually gets herself in trouble time and again. Kristen may have a pardon now but how long will it last? Did Kristen not just help steal a body from the morgue? Is Kristen not also hiding her brother who has declared dead years ago? It isn’t likely to be very long before Kristen ends up right back in Stateville and Rachel will end up hurt once again.