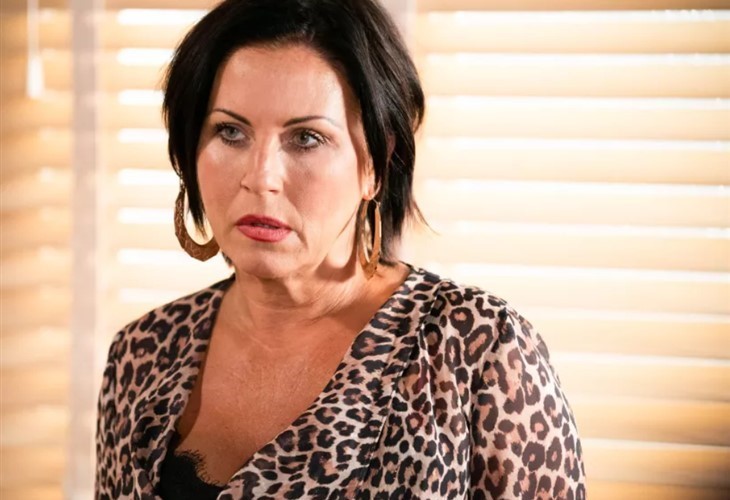 EastEnders spoilers and updates tease that Kat Slater (Jessie Wallace) will place all the blame for her son’s bullying problems on Phil Mitchell (Steve McFadden). She’ll argue that he influenced Tommy and got into his head, which was why Tommy Moon (Sonny Kendall) decided to use the knife.

Kat rushed to see Phil in prison to blame him for everything that has happened to Tommy. She told him that he influenced Tommy significantly, which was why Tommy has been acting the way he did recently. Phil tried to defend himself and said that he’s got first-hand experience with bullying because Ben went through the same thing in the past.

Kat threatened Phil that she’ll never forgive him if she loses her son. How will this storyline play out? Will the police find out that the stabbing incident was only an accident? Or will Sid and his parents provide a compelling story and make the police believe that Tommy stabbed him intentionally?

Last week, fans saw Tommy’s bullying storyline take a massive turn with a shocking knife twist. Fans may recall that Tommy started to feel more anxious when he saw the video of Sid bullying him. Isaac Baptiste broke up the latest scuffle between Tommy and his bullies in the playground. He also warned Kat about Tommy’s existing problem.

Later on, Tommy decided to bring a knife, which he hid in his bag. He tried to use it to scare his bullies but that’s when the accident happened. Tommy tried to walk away from his aggressors but Sid attacked him from behind.

In self defense, Tommy threw his backpack at Sid and the knife, which was in his bag, accidentally jabbed Sid in his shoulder. Tommy panicked and got scared, which led him to run away.

When Tommy arrived home, he didn’t tell Kat what happened. The latter said he can tell her anything but Tommy decided to keep the stabbing accident a secret.

In a recent episode, Tommy had no choice but to admit what really happened when asked about the stabbing incident by Detective Jack Branning (Scott Maslen). The latter also informed Kat and Stacey Slater (Lacey Turner) that Sid and his parents reported that Tommy allegedly stabbed Sid. Lily Slater (Lilia Turner) tried to defend Tommy by giving him an alibi but Stacey refuted her claims and said that she was lying.

Kat confirmed that the stabbing incident did happen when she found the knife. She confronted Tommy, who had no choice but to admit everything. Kat arranged for Tommy to have a talk with the police at their home. That’s when he explained that the stabbing was an accident.

She pointed out to the authorities that Tommy wouldn’t have resorted to using the knife if Phil didn’t get into her son’s head. Kat also revealed that Tommy decided not to share what he was going through because Phil told him not to.

Days Of Our Lives STUNNING Spoilers: Jan Is Pregnant, Shawn’s The Dad