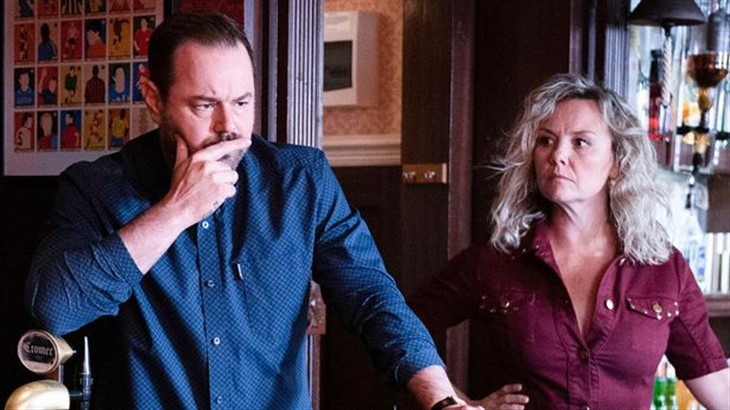 EastEnders spoilers, news, and updates that Janine Butcher (Charlie Brooks) and Mick Carter (Danny Dyer) learned about the serious complications of her pregnancy after she tumbled down the stairs. Things turn for the worse when she tells a lie to cover up her secret.

Fans may recall that Janine fell down the stairs at the tube station on the day of her first baby scan. Sharon Watts (Letitia Dean) tried to fix things in the Carter family. She told Mick to become more sensitive when it comes to his new setup with Linda Carter (Kellie Bright).

Later on, Mick’s attention was focused on football, and he forgot where he had placed his phone. So he was unable to pick up the call when Linda tried to call him as she saw Janine being loaded into an ambulance.

Linda had no choice but to go with Janine to the hospital. As a result, Linda ended up missing her schedule with her probation officer called Murray.

Mick eventually learned that Linda missed her scheduled check-in when Murray warned that she could lose her probation if she failed to appear on her next check-in.

Shirley Carter (Linda Henry) was the one who found Mick’s phone, and that’s when the latter learned about Janine’s ordeal. Mick immediately rushed to the hospital to be with Janine.

The doctors immediately informed them about the status of Janine’s pregnancy. The baby is alive, but there could be complications, such as partial placental abruption, that could lead to stillbirth. During this time, Janine will tell a lie as tries to cover up her secret.

Spoilers hint that Janine will continue to feel insecure over Mick’s connection with Linda, which will force her to take action. She will feel more upset when she learns that Mick is Linda. She then tells upsetting news, which Sonia will later on find out is a lie.

Sonia Fowler (Natalie Cassidy) confronts Janine and plans to tell Mick about it. However, Janine manages to stop her, but her weird behavior makes Shirley suspicious about what she’s been up to lately. Janine will assure Sonia that she’ll tell Mick the truth, but they’re both unaware that the latter is actually listening to their conversation. Janine starts to panic when Mick asks what she’s hiding from him.