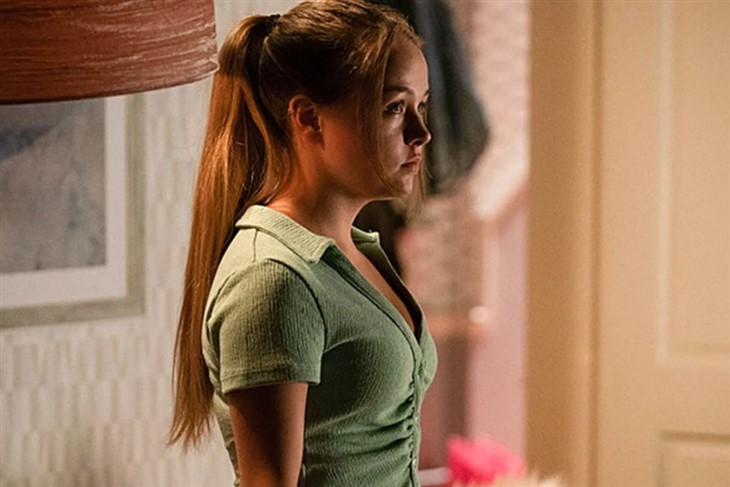 EastEnders spoilers, news, and updates tease that Amy Mitchell (Ellie Dadd) will make a shocking and dangerous decision as her self-harm storyline continues. Will Amy be able to overcome her struggles? How will Jack Branning (Scott Maslen) handle the situation?

Fans may recall that Amy struggled after her split with Denzel Danes (Jaden Ladega). Things became worse when rumors started to spread around her school that they slept together.

Amy has been cutting herself, and Sam Mitchell (Kim Medcalf) was recently made aware of this when she walked in on her harming herself. Sam found out that it wasn’t the first time she’d done this, but the teen managed to convince Sam to keep it a secret. In return, she asked Sam to join the family for dinner to celebrate her birthday at the Vic.

Jack was annoyed to see Sam arrive with Amy for the family dinner. Jack accused Sam of trying to get close to him, but she stopped him by confessing that Amy is harming herself. Now, her father is struggling with how he can help his daughter.

In the previous episode, EastEnders spoilers say Jack tried to talk to Amy, but she demanded that he stay out of her life. Denise thinks that Jack needs to take a different approach with Amy if he wants her to open up, but Jack takes offense at her suggestion.

Tension started to rise when Sam dropped by to check on Amy, and Denise told her to stay away from their family. Things become even worse when Denise finds Jack going through Amy’s things to find her self-harm kit.
Not only that, Jack talked to Amy’s head teacher at school and asked about any changes in her behavior since she started dating Denzel. Thinking that Jack is trying to find someone to blame, Denise tells him that it’s nobody’s fault.

Amy realizes that her father took her self-harm kit, so she swipes a pair of scissors without anybody noticing. What will Amy do with the scissors? Will she stop harming herself? How can Jack help his daughter?

EastEnders wants to make sure that they present Amy’s storyline accurately and with sensitivity. That’s why the soap’s bosses have been working with charities such as Alumina, Mind, and Samaritans on the emotional plot.

“We wanted to ensure the story was portrayed with the utmost care, which is why working alongside charities such as Alumina, Mind, and Samaritans was essential in ensuring it was depicted as sensitively and accurately as possible,” EastEnders’ executive producer Chris Clenshaw said.