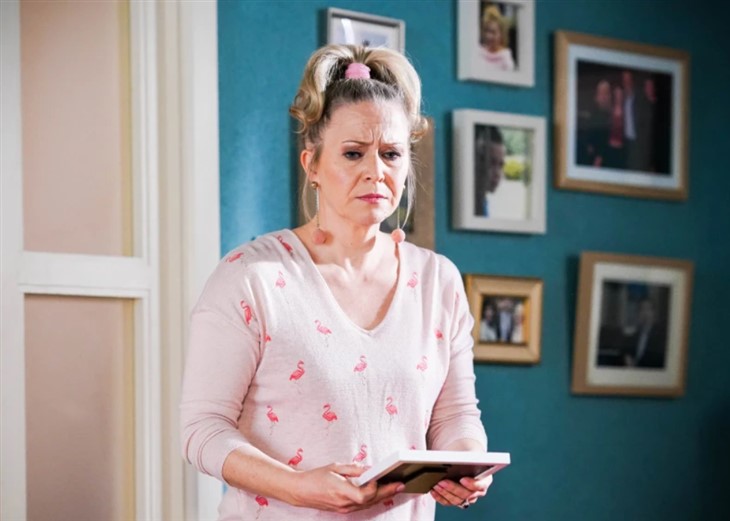 EastEnders spoilers and updates tease that Linda Carter (Kellie Bright) may leave Walford for good after Janine Butcher (Charlie Brooks) makes her a shocking exit offer. The latter will do everything she can to ensure that Mick’s estranged wife is out of their lives.

Mick is currently in a relationship with Janine, and it hasn’t been an easy ride for the couple. As for Janine, she believes that there’s one person who’s stopping her and Mick from becoming truly happy, and that’s no other than Linda. So, she’ll finally come up with a plan to get rid of her for good.

EastEnders spoilers show Janine’s worries and insecurities will worsen as Mick continues to communicate and spend time with Linda. In upcoming episodes, Mick wants Linda to stay with Martin Fowler (James Bye) and Zack Hudson (James Farrar). He’ll try to convince the pair to let her move back in, and in return, she’ll seek professional help.

Later on, Mick and Linda will go on a walk, which will leave Janine furious, especially after Shirley Carter (Tina Carter) points out that the pair will always be connected by something.

During their walk, Mick will encourage Linda to attend an addiction meeting. The latter was furious with his suggestion at first. She reconsiders his recommendation after Mick opens up about his own problems and struggles in coping with his experience with Katy Lewis (Simone Lahbib).

Mick also revealed that he’d be accompanying Linda in her meetings, which would leave Janine more paranoid. As for Linda, she’s pretty excited to spend more time with Mick and considers making an attempt to rekindle their love.

Linda asks Mick to tag along when Nancy invites her to a meeting at their new business. Mick turns down the offer initially but eventually joins them after learning that Linda got the space for a lower price.

While spending some time together with Mick at Walford East, Linda professes her love for him. How will Mick react?

As her paranoia continues to grow, Janine finally comes up with an idea to get rid of Linda. She offers the latter £25k to leave Walford and never return.  According to EastEnders spoilers, Linda accepts her offer only if Janine doubles her money offer.

Janine is ready to pay double, but only if Linda agrees to leave Walford tomorrow. Linda will prepare to leave Walford, but Zack will eventually figure out Janine’s cunning plan. Will Mick learn about Janine’s shocking offer to Linda? Is Linda really leaving Walford?