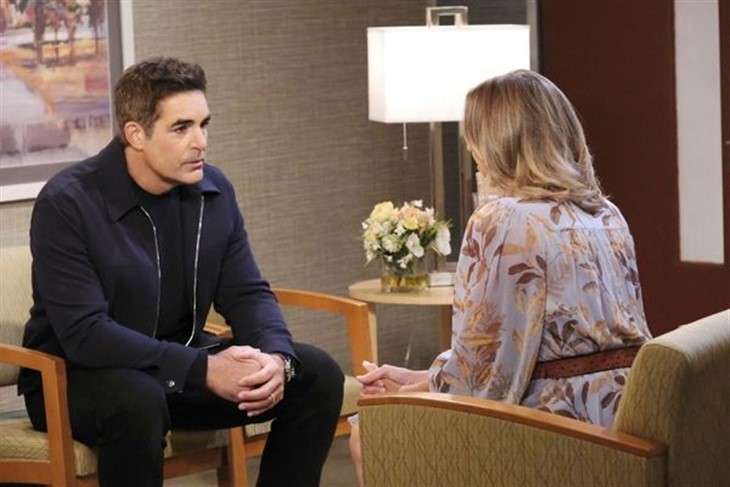 Days of Our Lives spoilers and updates tease in this week’s Soap Opera Digest that Rafe Hernandez (Galen Gering) and Nicole Walker-Hernandez (Arianne Zucker) will clash over the Thanksgiving meal. They run into each other and she insists on baking her mother’s pumpkin pie for his family – he accepts, but later proves he’s moved on.

Days Of Our Lives Spoilers – An Uncomfortable Cross

Rafe and Nicole have an uncomfortable cross at the Hernandez house when she comes back to pick up her things. She shows up unannounced, and he’s disappointed, hurt and angry and just wants her to hurry up and go. He feels left in the lurch by her showing up with no warning but she realizes she’s left him in the lurch regarding Thanksgiving.

Nicole insists on making her mother’s recipe of pumpkin pie for Rafe and his family’s Thanksgiving, even if she’s not attending. He grudgingly agrees, but maybe just to get her to hurry up with her moving tasks and get out of there.

Since it’s time for the evening meal, Rafe and Nicole prepare a dinner for the two of them and discuss their divorce proceedings while they eat. Distasteful discussions are one way to diet, but that’s not the purpose of their meal, it’s more out of convenient timing than anything else.

Rafe is mature about the divorce discussion, telling Nicole he doesn’t want to drag things out and just wants to get it all over with. He feels it’s in everyone’s best interests to just get it done and move beyond the sticky situation, and they continue to hash things out during their meal. Nicole agrees and so they continue to discuss their divorce proceedings and everything that goes with that, and before she leaves she apologizes and hopes they can still be friends.

Days Of Our Lives Spoilers – A Drop Off Decision

Come Thanksgiving Day, Rafe has Thanksgiving with Li Shin (Remington Hoffman) and his sister Gabi Hernandez (Camila Banus) and presumably, Nicole drops off her pie before they arrive. Her hopes to remain friends at this point give him indigestion, and after she drops off the pie he sees it as a symbol of their broken relationship. Rafe is still feeling the sting of her betrayal with Eric Brady (Greg Vaughan).

Once Rafe is alone, he takes her pie and dumps it in the trash, as if to say he’s glad she worked so hard on it, he’s throwing it away. It’s only a reminder of how hard he worked on their relationship, and she threw it away.