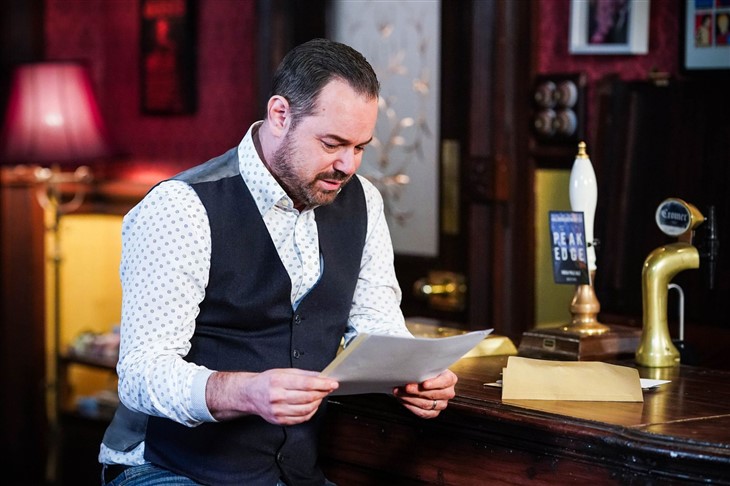 EastEnders spoilers, news, and updates tease that Mick Carter (Danny Dyer) will have to make a huge decision about whether to choose Linda Carter (Kellie Bright) or Janine Butcher (Charlie Brooks). Will he move forward with asking Janine’s hand for marriage, or will he end up choosing Linda instead?

Spoilers hint that Mick plans to propose to Janine next week. But fans will have to wait and see in next week’s episode whether or not Janine will say yes once Mick drops to one knee and proposes to her.

After he pops the question, Linda shares the news with Shirley Carter (Linda Henry), who’ll be furious over his decision. She even asks Linda to come up with a plan to stop their marriage.

Later on, Linda senses that something is off with Mick and asks if he really wants to marry Janine. As for Sharon Watts (Letitia Dean), she tries to arrange a blind date for Linda. Unfortunately, he doesn’t show up, so Alfie Moon tries to save the day by buying Linda a drink, which clearly annoys Mick.

Not long after, Mick and Linda share some sweet moments together as they recall the time when they first bought the pub. But their walk down memory lane gets interrupted when Alfie shows up for his shift.

Mick decided to tell him that his services were no longer needed. Shocked by the news that he’s being let go, Alfie asks Mick if he really loves Janine, which infuriates Mick even more. Will Mick realize that he loves Linda more than Janine?

Whatever decision Mick makes, fans know that he’ll be leaving EastEnders soon. Reports also came out hinting that the EastEnders team filmed cliff-off scenes for Mick, which may pave the way for his exit. Sources say that he’ll jump off the side of a cliff following a car crash.

It won’t just be Danny Dyer who’s leaving the show. Charlie Brooks is also set to bow out in the coming months.
“I was only ever due back to EastEnders for a year, but when [executive producer] Chris Clenshaw presented me with his idea for the story, I couldn’t say no to staying a little longer,” Brooks said.

“I’ve had an amazing time, as I always do when I go back. But as always with Janine, she probably should not outstay her welcome – for everyone’s sake,” she continued.