EastEnders: Will Kheerat Find A Way To Save Suki After Arrest Over Ranveer’s Murder? 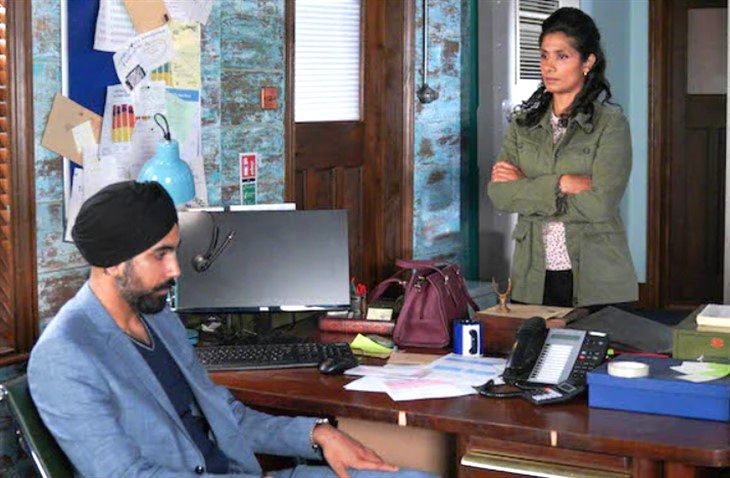 EastEnders spoilers, news, and updates tease that Kheerat Panesar (Jaz Deol) will make a shocking discovery following the arrest of his mother, Suki Panesar (Balvinder Sopal), over the death of Ranveer Gulati (Anil Goutam). What will he do to prevent his mum from going to prison?

Fans know that Suki thinks she was responsible for Ranveer’s death. Fans may recall that the latter tried to blackmail her into sleeping with him in exchange for closing a business deal. Their meeting turned into a violent showdown when Ranveer tried to assault Suki. She knocked him over the head, leaving him unconscious.

Suki thought she killed Ranveer. She had no idea that he was just unconscious, and it was Ravi Gulati (Aaron Thiara) who took his life. The discovery of Ranveer’s body will cause Ravi and Nina Gupta (Hersha Verity) to panic that their secret may soon be exposed. Not only that, another revelation will soon come to light, which will further cause a massive change in the lives of the Panesar family.

Davinder ‘Nugget’ Gulati (Juhaim Rasul Choudhury) receives updates from Ravi about what’s going on while Nina grows concerned that she’s not Ravi’s main priority, but Nishandeep “Nish” Singh Panesar (Navin Chowdhry) is. Fans know she’s romantically involved with Ravi, and they’ve been trying to con the Panesars. Not only that, Ravi is Nish’s secret son.

She tries to confront him, but they’re interrupted by the police. DS Manners wants to get to the bottom of things after noticing discrepancies in Ravi and Nina’s statements, leaving the pair anxious and alarmed over the looming exposure of their deadly secret.

In a previous episode, Kheerat and Nish overhear Ravi discussing Ranveer’s murder over the phone. When confronted, he lied about his involvement and pointed the finger at Suki. Kheerat still remains suspicious of Ravi, but Suki confirmed Ravi’s statements when her son and husband confronted her.

Later on, the police arrest Suki for Ranveer’s murder. The Panesars are left concerned as the authorities question Suki and search her house. Ashneet “Ash” Kaur Panesar (Gurlaine Kaur Garcha) breaks down over the possibility of losing her mother, while Kheerat takes out her anger on Nish. Things get even worse when new secrets come to light. What decision will Kheerat make, and how does he plan to help Suki?

Sister Wives Spoilers: What Is Kody Brown’s Side Business With Brian Coalwell?