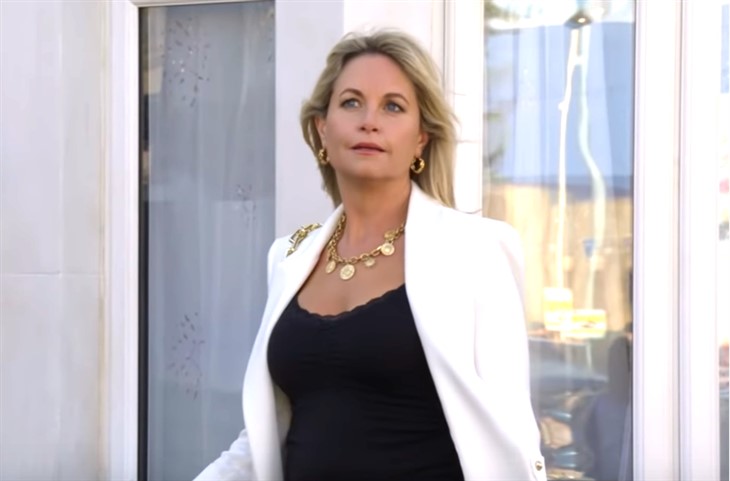 EastEnders spoilers and updates tease that Sam Mitchell (Kim Medcalf) makes a new shocking move as she is forced to face the consequences of her betrayal against the Mitchell family. In the double episode that aired on August 4, Phil Mitchell (Steve McFadden) learned that Sam knew about Ben’s drug habit, and she’s been letting it happen.

Fans know that Ben has been spiraling out of control after he was sexually assaulted by Lewis Butler (Aiden O’Callaghan). He turned to drugs, and things have gone from bad to worse ever since.

After an upsetting exchange with Lexi (Isabella Brown), Ben looks for James McIntyre (Anto Sharp) ; they head out to take drugs and party. Ben recalls the dinner schedule and tries to find his way home. He leaves a voicemail for Lexi, but he collapses and never makes it to dinner.

After Ben’s near-death experience, Sharon’s secret will start to unravel. Phil ignores Sam’s call. The latter starts to panic and instructs Zack to keep quiet about the drugs in the bar. She also warns Jonah that they need to stop the drug deals. He agrees only if Sam compensates him in return.

Sharon Watts (Letitia Dean) tells Phil that Sam knows about Ben’s drug problem, and she’s not doing anything about it. Phil then confronts Sam that he knows about the drugs. He decides to throw her out and disowns her from the Mitchell family.

In the second episode, Sam tries to beg for Phil’s forgiveness, but the latter isn’t interesting. Later on, Sam comes up with a plan to win Phil’s trust back after she learns about what Lewis did to Ben.

Meanwhile, Sam tries to fire Zack after learning that it’s his fault her secret is out. However, Kathy Beale (Gillian Taylforth) has something else in mind. Zack is willing to make it up to Sam, but he’ll refuse Sam’s request to bring Lewis to her. Sam doesn’t take no for an answer and threatens to tell Phil that Zack knew about the drugs. Fans will have to wait and see if Zack will comply.

Suki Panesar (Balvinder Sopal) will also witness Phil’s dark side as her actions when Ben collapses backfires. Viewers may recall that she left Ben for dead when she found him struggling to breathe after an accidental drug overdose. What will Phil do to Suki?