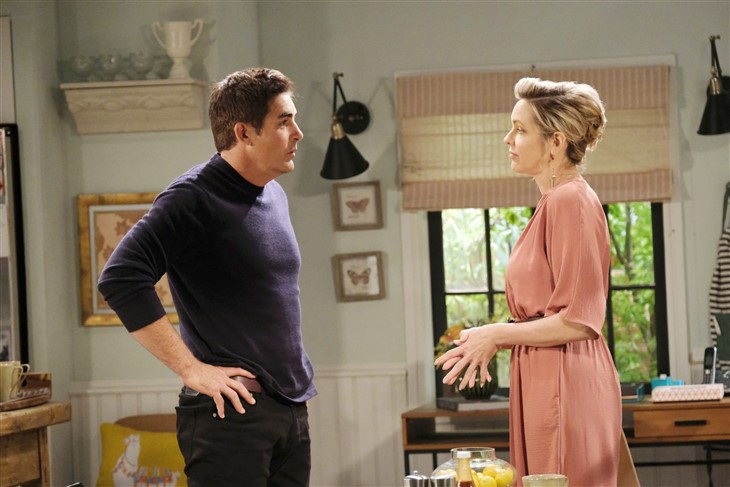 Days of Our Lives spoilers tease that Rafe Hernandez (Galen Gering) and Nicole Walker (Arianna Zucker) have ended their short-lived marriage due to Nicole’s decision to once again reunite with true love Eric Brady (Greg Vaughn)… again. But things didn’t quite work out the way Nicole had planned. Eric’s former girlfriend Jada Hunter (Elia Cantu) was pregnant. Nicole ignored the fact that Eric had always wanted children and spoke to Jada herself. The result was that Jada decided to have an abortion, which left Eric furious and his future with Nicole in doubt.

Days Of Our Lives Spoilers – EJ DiMera To The Rescue!

Meanwhile, EJ DiMera (Dan Feuerriegel) is still dealing with the death of his mother Susan Banks (Stacey Haiduk). After commiserating over drinks, EJ offered Nicole a place to stay. They ran into Eric and after an altercation, EJ and Nicole slept together. All of this will be news to Rafe who likely won’t take the news well. He broke up with Nicole so she could be with Eric, not hooking up with EJ. Look for a fiery confrontation in the days ahead.

DOOL Spoilers – Rafe Hernandez Will Be Glad To Be Rid Of Nicole Walker!

Nicole doesn’t seem upset that her marriage failed as much as the fact that she can’t be with Eric. This will likely hit Rafe like a ton of bricks. It isn’t so much that Nicole wanted to be with Eric, more like she didn’t want to be married to him. At least, that’s likely the way Rafe will see it. Rafe hadn’t planned on fighting the divorce but all that may change once he discovers that Nicole is now living at the DiMera Mansion. He may even decide to make life difficult for Nicole as far as their divorce is concerned,

The one bright spot in all this, at least as far as Rafe is concerned, will be that Jada is now completely free of Eric. Although as Police Commissioner, he is Jada’s boss that doesn’t mean that a romance isn’t possible for this duo. After all the hurt bestowed upon them by Eric and Nicole, these two deserve a happy romance. But there might be another complication as well. Jada may not have had an abortion after all. If so, she may still be pregnant but she will need someone to step up and pretend to be the father and that person might just be Rafe!

Did Jada have the abortion? How will Rafe handle Nicole’s new living arrangements? Could Rafe and Jada find love after all this misery? Anything can happen in Salem so stay tuned to Days of Our Lives streaming every weekday on Peacock. And don’t forget to check back right here regularly for all your Days of Our Lives news, information, and spoilers!