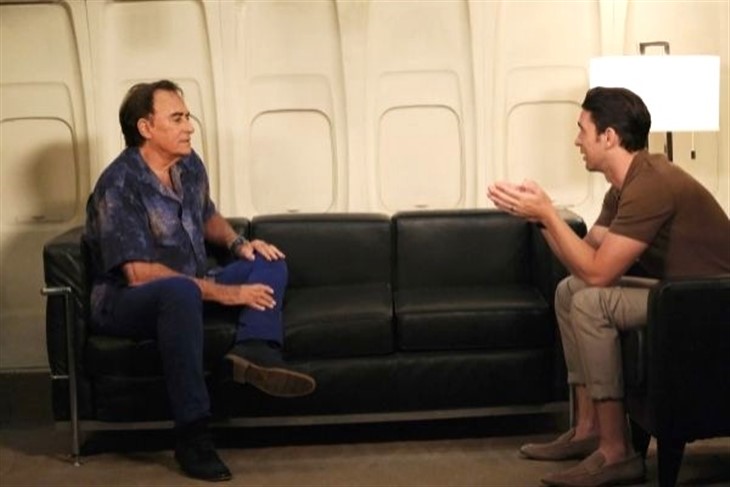 Days of Our Lives spoilers and rumors tease that Chad DiMera (Billy Flynn) and Tony DiMera (Thaao Penghlis) will worry about a drunken EJ DiMera (Dan Feurriegel).  EJ will return to the DiMera mansion claiming he’d been in a confrontation with Ava Vitali (Tamara Braun) – has he drank so much he’s hallucinating?

Days Of Our Lives Spoilers – A Rustling In The Leaves

After Rafe Hernandez (Galen Gering) tracked EJ down at the scene of the accident, EJ, quite inebriated after drinking a flask of “premium malt” started to leave. He had assured Rafe that he had a driver waiting with his car so he wouldn’t be driving drunk, and as he started walking away he heard rustling leaves. It sounded like someone walking towards him and he cried out “Mother” holding out vain hopes that somehow Susan Banks (Stacy Haiduk) had survived.

Instead, he saw Ava coming towards him, confronting him over the fact that it was his own fault Susan was killed and now he was responsible for her death as well. Ava, appearing like a ghoulish spectre indeed, kept taunting and accusing him, telling him he would pay dearly for his murderous actions.

Tony tells Chad he had been worried that EJ’s pursuit of Ava, gun in hand, to save his kidnapped mother would come to no good. That is why he called Rafe about what was happening that night to stop something bad from happening but it came out even worse. Chad remembers when EJ came after him when he was ready to kill Clyde Weston (James Read) and prevented a tragedy, and wishes he could have prevented this one. EJ stumbles in, obviously devastated but also drunk out of his mind, and his brothers encourage him to talk, and he tells them of his confrontation with Ava. Tony and Chad have heard the news reports and they worry EJ is literally out of his mind with grief, the liquor not helping matters any.

Tony heads out of the room to get strong coffee while Chad tries to get EJ settled down because he’s practically manic and definitely out of control. Tony’s known EJ much longer than Chad has and he has never seen him in such a horrible state, not even when Stefano DiMera (Joseph Mascolo) died. Tony, back with a pot of coffee and a large cup tries to reason with EJ, telling him he did nothing wrong, and “Ava” is his inappropriate self-blame and alcohol talking.

EJ claims Ava survived, and she’s real, and no hallucination. Chad and Tony hope he’s wrong, but if he’s not, locks need to be changed and Rafe needs to be called.

GH Spoilers: Carly’s Assistance To Dex Brings Her Back Into Sonny’s Orbit — And Nina Can’t Stand It