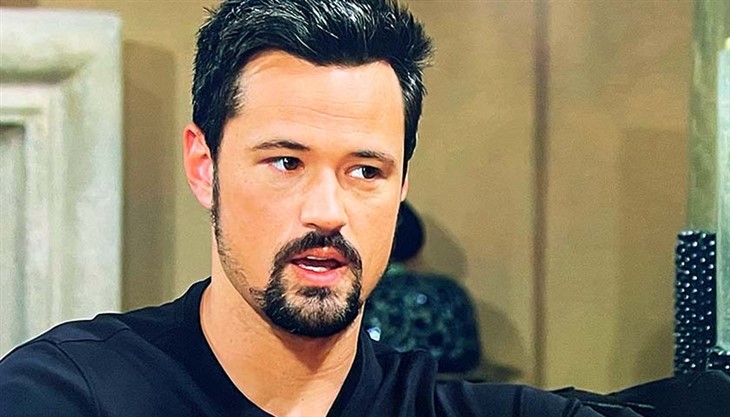 The Bold and the Beautiful spoilers document that Hope Spencer (Annika Noelle) responded to Thomas Forrester (Matthew Atkinson) just as his family did. Brooke Logan (Katherine Kelly Lang), who he does not consider his family, was also outraged by Thomas’ actions.

Framing Brooke caused Ridge Forrester (Thorsten Kaye) to break from his wife. He sought nostalgic comfort by telling Taylor Hayes (Krista Allen) he wanted to be with her for the rest of his life.

The resulting remarriage fail played out at the Forrester mansion because Douglas Forrester (Henry Joseph Samiri) felt compelled to reveal what his father did.

The Bold and the Beautiful spoilers say Steffy Forrester Finnegan (Jacqueline MacInnes Wood) is no fan of Brooke. But Wood’s character knew it was wrong for her brother to manipulate reality to the extent he did.

Fans recall Steffy taking her father’s smartphone and answering it when Brooke called. Ridge and his Forrester family were enjoying time at the cliff house. That caused Steffy to block Brooke from speaking to him.

Hope was more than angry when speaking down to him in the Forrester Creations’ executive office. Plenty of drama happens in what is supposed to be a workplace as devoted fans regularly witness.

Thomas tried to explain himself to the woman he says he loves. Hope had none of it, telling him that Douglas no longer wants to see him. But she went further for the first time.

Hope twisted the emotional knife when eviscerating Thomas. She said he was sad and pathetic, referenced the Beth Spencer (Madeline Valdez and River Davidson) is not Phoebe storyline, and then abruptly left him.

The Bold And The Beautiful Spoilers – Thomas Forrester Slips Over The Edge?

The Forrester family must soon realize that Thomas can not be left on his own. As Ridge painfully admitted at the shortened ceremony, his oldest son is sick.

Taylor is a psychiatrist, but she is reeling. Steffy has become drawn back into her husband’s Sheila Carter (Kimberlin Brown) world. So, neither of Thomas’ other family members appears to realize he is in danger.

Thomas’ actions were wrong. But the consequences what he did should not be leaving him to his own devices. He needs professional treatment soon, or a dangerous descent is likely on B&B.