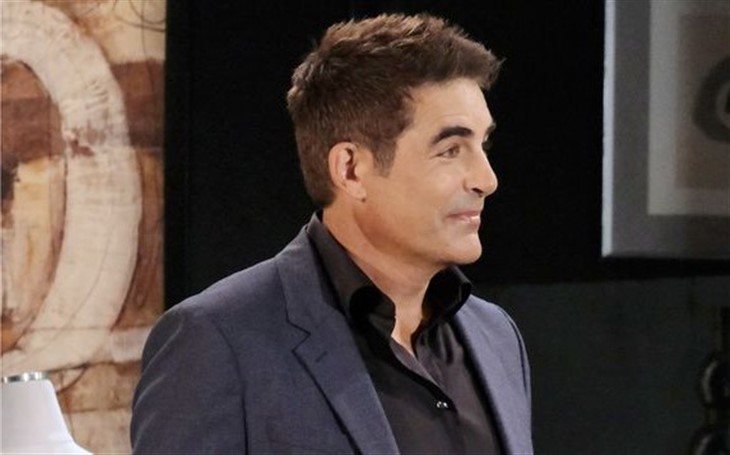 After Rafe left EJ and Tony and Chad DiMera (Thaao Penghlis, Billy Flynn) found him, EJ claimed Ava had approached him alive, and they struggled. Indeed she had, and the two of them had struggled over a gun she had pointed at him and the gun went off, EJ falling with his head on a rock. By the time his brothers found him unconscious and with an empty liquor flask nearby, they assumed he was hallucinating and passed out, but they didn’t see the bullet casing.

Salem Police forensic investigators later combed the site and found the bullet casing after the first responders assumed no one could have lived through the fiery crash. Presumably by that time they were able to comb through the wreckage as well, but perhaps found no bodies considering the car was utterly consumed-Ava had jumped out before it crashed.

After Rafe is informed a bullet casing was found at the scene, and it’s not something left by a hunter’s rifle, he has many more questions for EJ. He really didn’t get his questions answered at the site of the wreck but he could tell EJ was in too much pain and too drunk to think clearly. It was obvious that he was following Ava in the car where she had Susan tied up but Rafe had needed to know more details. The car was burned beyond all recognition and not even burned bones were found, although Rafe had found some evidence at the airstrip; but now he needs EJ’s gun. Tony had called Rafe to let him know EJ was trying to rescue his mother who’d been kidnapped by Ava, and that he had his gun.

Days Of Our Lives Spoilers – A Fool For A Client

EJ may be a lawyer, but he should know that any lawyer who defends himself has a fool for a client; however, taking a gun was wise. He was trying to rescue his kidnapped mother from a dangerous woman who was off the rails, and that would not constitute probable cause. Rafe realizes EJ was blackout drunk and may not be able to give him all the answers but the gun needs to be tested against the bullet casing.

EJ allows it and also remembers more than Rafe thought he would – after Rafe left and before his brothers came, he had struggled with Ava over a gun. Rafe doesn’t take his Ava sighting lightly, because there had been other reports as well.