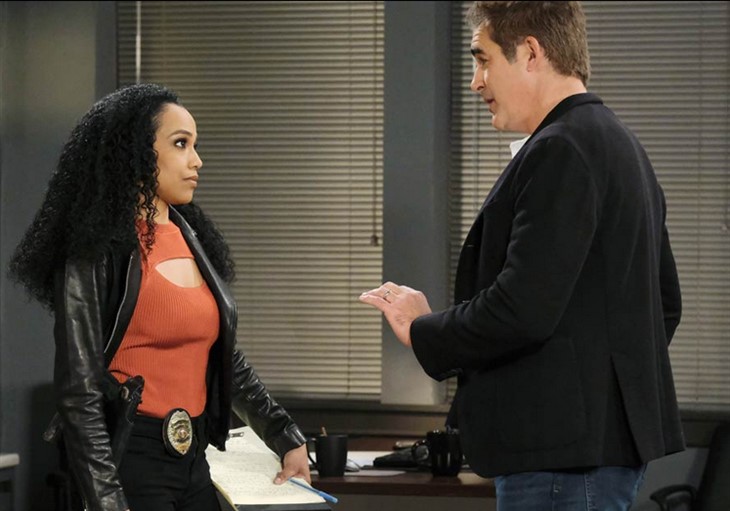 DOOL spoilers reveal that Thomas has been keeping a secret ever since Abigail DiMera’s (formerly played by Marci Miller) murder. As fans recall, Leo was caught by Thomas hiding out inside the secret room of the DiMera mansion. Leo covered by claiming he was the tooth fairy, then swore Thomas to secrecy.

That night, Abigail was brutally murdered. Thomas never told Chad or Marlena Evans (Deidre Hall) about the tooth fairy. At least, not until Thomas pointed the finger at Leo.

Now that there is new information and a new lead, Jada goes with Chad to search where Leo was hiding. Meanwhile, Shawn Brady (Brandon Beemer) tries to get a confession out of Leo. According to the new issue of Soap Opera Digest, Leo continues to claim that he’s innocent of murdering Abigail.

Days of Our Lives spoilers reveal that during the week of August 15, Chad shows Jada where the secret room is in the DiMera mansion. Jada works the room very carefully and finds a fork. Jada hones in on the fork because of what Thomas said about bringing Leo breakfast the morning of Abigail’s death.

The fork is dusted for prints. Once Jada returns to the police station, she has interesting news to share with everyone. The prints on the fork match Leo, which makes him look even guiltier. At this point, Leo knows that he needs a lawyer.

Rafe is the commissioner and was under pressure to solve Abigail’s murder from every direction. Not only did Chad demand answers but so did DA Melinda Trask (Tina Huang). Rafe shouldn’t have just searched the room where Abigail was killed in. Rafe should have insisted that the entire house as well as the property it lays on be thoroughly searched.

That might not be Rafe’s only problem, though. Chad was pretty furious that Rafe was having dinner with Nicole Walker (Arianne Zucker) instead of rushing to the station when Leo was brought in.

While everyone needs time off, Rafe has been letting his personal life interfere with his job. Considering how mad Chad is about Rafe’s job on this investigation, could Jada be responsible for the commissioner suddenly getting demoted?