Days Of Our Lives Spoilers: Who Is Susan Banks? DOOL Character Explained 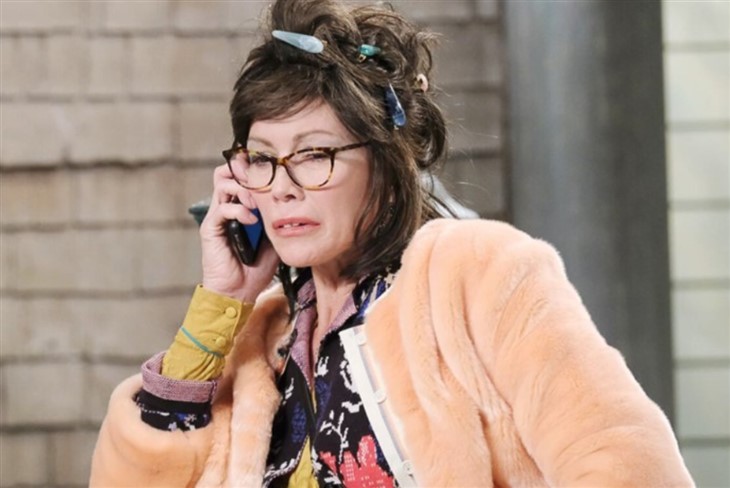 Days of Our Lives spoilers and updates tease that newer viewers might want to know a little more about the kooky Susan Banks (Stacy Haiduk) and her history. Here’s everything you need to know.

Days Of Our Lives Spoilers – Susan Banks First Appeared In 1996

Susan first appeared in 1996, played by Eileen Davidson as Kristen DiMera was, when Kristen was hospitalized after an explosion that killed her mother and caused a pregnant Kristen to miscarry. Stefano DiMera (Joseph Mascolo) reappeared bringing a lookalike, Susan, to carry a baby for Kristen to raise as hers and John Black’s (Drake Hogestyn). Kristen than faked another pregnancy, and when Susan went into labor Kristen, disguised as a nurse, was forced to watch John marry Susan, thinking she’s her.

Kristen took custody of the baby long enough to name him John Black, Jr. but Susan then returned to claim her husband John and baby. To make a long story short, Susan was able to reclaim her baby who she named Elvis John, now EJ DiMera (Dan Feurreriegel).

Susan is a quadruplet, with one sister named Penelope Kent who passed away, a brother named Thomas, and another sister named Mary Moira. All three remaining quadruplets have been played over the years by both Stacy Haiduk and Eileen Davidson in Days of Our Lives and the Beyond Salem spinoffs. Mary Moira is a nun, while Thomas is a gangster and hit man, with no children being mentioned among them. She has been married twice, once to John and once to a man named Edmund Crumb (Adam Caine) and is involved with Roger Fisher (John Enos lll). It is believed Susan had other children after EJ, but no names have been mentioned or actors cast, and travels between her home in Memphis and Salem.

Susan is also a psychic, having frequent premonitions, and even though they are not always clear cut and require interpretation, they usually turn out to be true. Susan and her psychic visions were instrumental in finding the presumed dead Ciara Brady Weston (Victoria Konefal) and later identifying satan in Marlena Evans (Deidre Hall). Susan has always had a unique style in dressing although has become a little kookier over the years.

She started in the mid-1990s with a 1960s look complete with cat eye glasses and a beehive and has progressed into a 1970s look somewhere between Boho and hippie. Susan has never failed to be her own unique self, except during those times when she has had to impersonate Kristen.

GH Spoilers: Scott Gets An Unexpected Call, The One Case He Won’t Take?