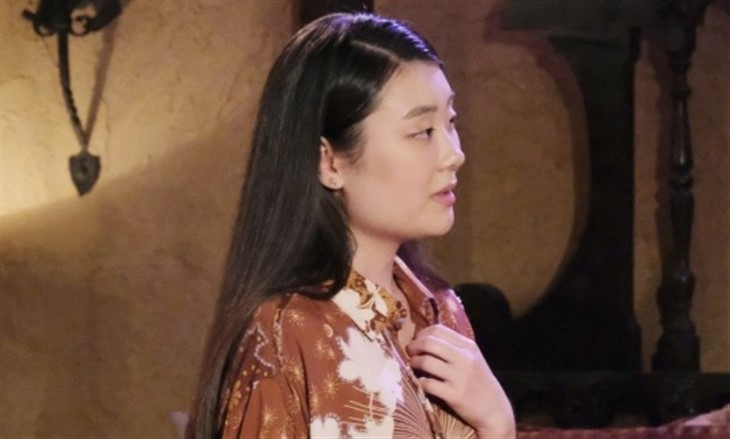 Days of Our Lives spoilers and updates tease in this week’s Soap Opera Digest that Wendy Shin (Victoria Grace) will rip into her brother over his manipulations. She and Johnny DiMera (Carson Boatman) have just arrived home from Jakarta where they were able to confirm their suspicions that Stefan DiMera (Brandon Barash) was brainwashed.

A lot of the brainwashing requests came from Kristen DiMera (Stacy Haiduk) but EJ DiMera (Dan Feurreriegel) has a part in it too, and Johnny confronts his father separately. Li didn’t go into this project aiming to fall for Gabi Hernandez (Camila Banus) but he did, in spite of himself, and doesn’t want to lose her. He knew if Stefan wasn’t brainwashed of his feelings for Gabi, that Gabi would go back to Stefan and his job might be down the drain.

Days of Our Lives spoilers show Li isn’t without guilty feelings, but on the other hand he doesn’t want to be caught, and the catch-22 is his worst nightmare. But Wendy is persistent, and he does eventually confess everything to her, his family allegiance overriding his need to cover it up.

DOOL Spoilers – Too Much Evidence

Wendy confronts him with too much evidence for him to lie his way out and that’s what forces his admissions, although he tries to get her to keep quiet. Emotionally, he feels bad, but mentally, he knows the lie has to be kept up because he can’t lose Gabi; his feelings for her are real. He does feel justified in having Stefan brainwashed considering what’s at stake, and Wendy starts to see where he is coming from; Wendy cares about Gabi but family loyalty overrides.  Li turns out to be very convincing and manages to swing her over to his side to keep the secret even though there’s one she doesn’t know.

What neither Wendy nor Johnny know is that Li got a heads-up from Rolf that they had arrived, and it was Li’s idea to drug them. Unfortunately for Li, Rolf didn’t use the amnesia drug that he had used on Gabi previously and they remembered what they’d learned. For Li, the end justifies the means, meaning he’d do anything to stay with Gabi including having his own sister drugged or brainwashed if necessary.

He doesn’t regret a thing that he did, and if he eventually has to have both Wendy and Johnny brainwashed he’ll have it done. If all else fails, he may even have Gabi brainwashed to forget Stefan if that’s what it takes to keep her.