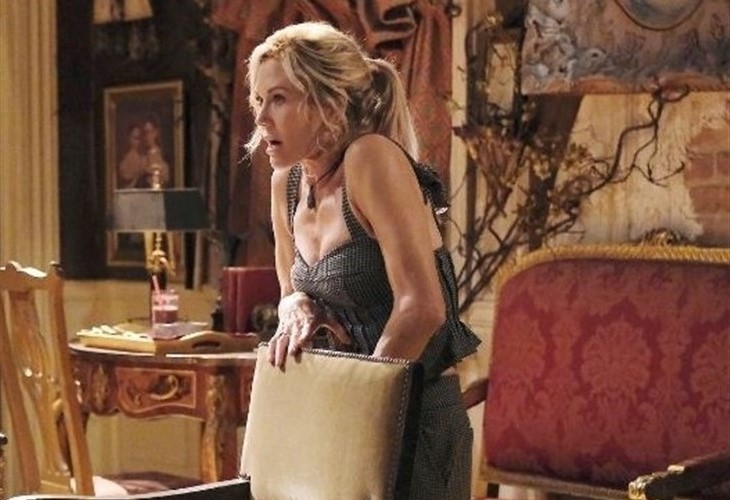 DOOL spoilers reveal that Leo is determined to punish Abigail. Leo knows that Gwen would also like to get revenge on Abigail. Murder was mentioned when Leo and Gwen talked. However, Leo took it off the table and Gwen said she would think about how to get payback.

During the week of June 6, Gwen will make an ominous phone call. Gwen doesn’t have many people who would take a phone call from her. So, could this phone call be to Ava Vitali (Tamara Braun), or perhaps it’s to Kristen?

During that same week, expect Leo to take action regarding Abigail. Leo will hide in the tunnels inside the DiMera mansion. Leo probably spies on Abigail and Chad DiMera (Billy Flynn). Leo might learn that Abigail has decided to investigate a new story, which could revolve around Sonny Kiriakis’ (Zach Tinker) drugging.

However, Leo could also be hiding in the DiMera mansion to get dirt on Abigail. When Leo overhears Abigail’s new story idea, he could realize his enemy is an even bigger threat. Despite Leo hiding out, Thomas DiMera (Cary Christopher) discovers the stranger in the tunnels. Due to how young Thomas is, Leo could easily manipulate the child into keeping quiet.

Days of Our Lives spoilers for the week of June 6 confirm that Chad makes a horrifying discovery. With insiders hinting that Abigail is brutally murdered, Thomas will likely speak up about the stranger in the tunnels. That could lead Leo to be accused of killing Abigail.

Leo might be a con artist and a sleazy manipulator. However, he probably isn’t the one who murders Abigail. Plus, Rikaart is still filming scenes that will air months from now, so he doesn’t go to prison.

It is teased that Susan will sense an evil presence. It’s also hinted that someone is hiding in Salem. Fans saw Kristen somehow learn about the DiMera shareholders meeting, which she called in on to enter her vote. Everyone assumes that Kristen is hiding outside of Salem. Could Kristen be close than anyone realizes, though?

Plus, Abigail was the one who investigated Sarah Horton’s (Linsey Godfrey) disappearance. Will Kristen murder Abigail to get revenge? Perhaps Gwen and Kristen make another sinister deal?