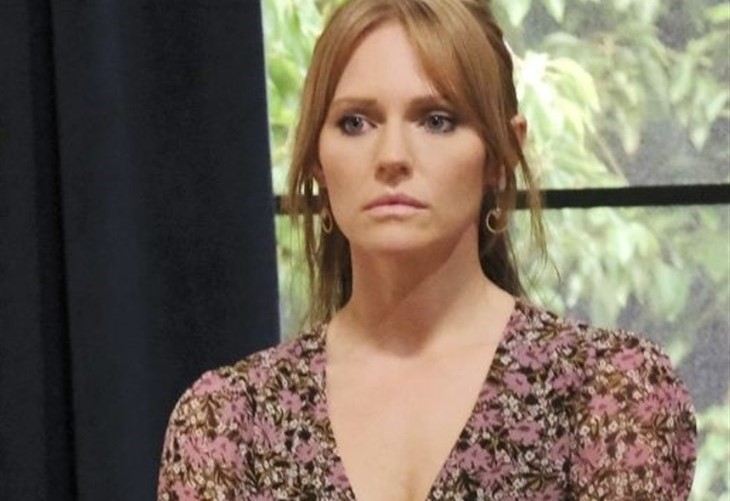 Days of Our Lives spoilers reveal that Leo Stark (Greg Rikaart) keeps pushing Gwen Rizczech (Emily O’Brien) to help him get revenge. Gwen might be behind bars now, but she will likely escape. Even though it’s hinted that Abigail DiMera (Marci Miller) is murdered in summer 2022, could there be an unexpected twist? Perhaps Gwen is killed while wearing an Abigail mask?

DOOL spoilers reveal that Leo is determined to get revenge on everyone who participated in blowing up his relationship. One of the people that Leo wants to punish is Abigail. Leo knows how much Gwen hates and blames Abigail for everything going wrong in her life. So, Leo suggested that they come up with a plan together.

Despite Gwen being behind bars right now, she will find a way out of her predicament. An escape plan is what seems most likely to happen. During a recent episode, Leo brought up murdering Abigail. That plan was quickly abandoned. However, it’s interesting that it was mentioned given the recent rumblings about Abigail’s death.

Insiders are hinting that there is more mask madness to come. It used to be that the only person wearing masks was Kristen DiMera (Stacy Haiduk). Then, Ava Vitali (Tamara Braun) got in on the action. Gwen is the most recent character to make use of the masks.

If Gwen happens to escape prison, then expect her to go after Abigail. Gwen and Leo might put a plan in place together. However, Gwen could face possible exposure or a snag, forcing her to compromise. What if she wears a mask to look like Abigail, perhaps to ruin Chad DiMera’s (Billy Flynn) marriage again?

Days of Our Lives spoilers for the week of June 6 reveal that Chad makes a horrifying discovery. This might not have anything to do with Abigail. However, with it being hinted that a major death is coming up, it could be Abigail’s dead body that Chad finds.

It’s possible that Chad believes it is Abigail’s body he stumbled upon. However, Gwen has been written into a corner and there is no redeeming her anymore. The only way out for Gwen is death.

So, what if Gwen impersonates Abigail, possibly without Leo’s knowledge? Obviously, the coroner would discover “Abigail” was a mask and Gwen was the real person underneath. That would make the summer spoiler that a murder has a large number of suspects make more sense.

Then, the real murder mystery begins, which could lead to Abigail being arrested for the crime. We will have to see if this theory pans out of it the writers have something else planned.