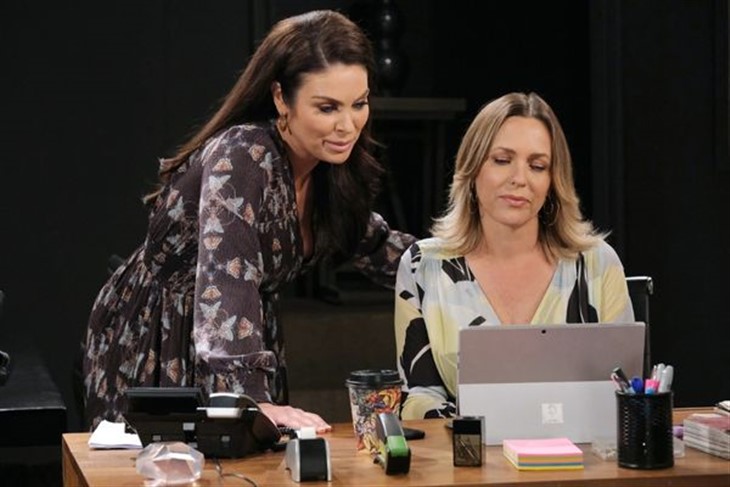 Days of Our Lives (DOOL) spoilers for Tuesday, November 29, 2022, reveal Nicole whining about the biggest problem in her life — someone else’s pregnancy.

Days Of Our Lives Spoilers – EJ DiMera Has A Fascinating Encounter

As if Nicole Walker (Arianne Zucker) did not alienate herself with fans last week when she whined to Jada Hunter (Elia Cantu) about how horrible pregnancy is on your body and life so maybe she would like to have an abortion for no real reason after Jada had already made up her mind to keep her baby.

Now, it’s time for Nicole to take her troubles to Chloe Lane (Nadia Bjorlin), the woman who carried a child for her and then didn’t even want Nicole to raise that child. Will Chloe just roll her eyes at her friend or will she sympathize with Nicole’s apparent pain? After all, Chloe just lost a guy because of the mother of his child.

Speaking of the guy Chloe lost, he is just thrilled for Eric Brady (Greg Vaughan). Yes, Brady Black (Eric Martsolf) congratulates his brother on impending fatherhood and promises to be there to support him.

DOOL Spoilers – Johnny DiMera And Wendy Shin Are Back And Angry

Johnny DiMera (Carson Boatman) and Wendy Shin (Victoria Grace) make their way back to Salem from Jakarta armed with some pretty damning information about EJ DiMera (Daniel Feuerriegel) and Li Shin (Remington Hoffman). While Johnny tries to chew out his father, he might notice that EJ is in no shape to be chewed out by anything.

Will someone inform him that Grandma Susan Banks (Stacy Haiduk) is allegedly dead and there’s a time and place for everything? Johnny is bound to be heartbroken.

Meanwhile, Gabi Hernandez (Camilla Banus) and Li Shin are sharing a close moment while planning their wedding when a furious Wendy interrupts them. She has a bone to pick with her brother and she’d rather Gabi leave them alone — for now.

Will Wendy eventually tell Gabi why Stefan O. DiMera (Brandon Barash) really rejected her for Chloe or will Li talk her out of blabbing? Gabi might even remember herself if that serum that Dr. Wilhelm Rolf (Richard Wharton) gave her wears off… Stream Days of Our Lives weekdays on Peacock by 6 am EST to see how these stories play out.