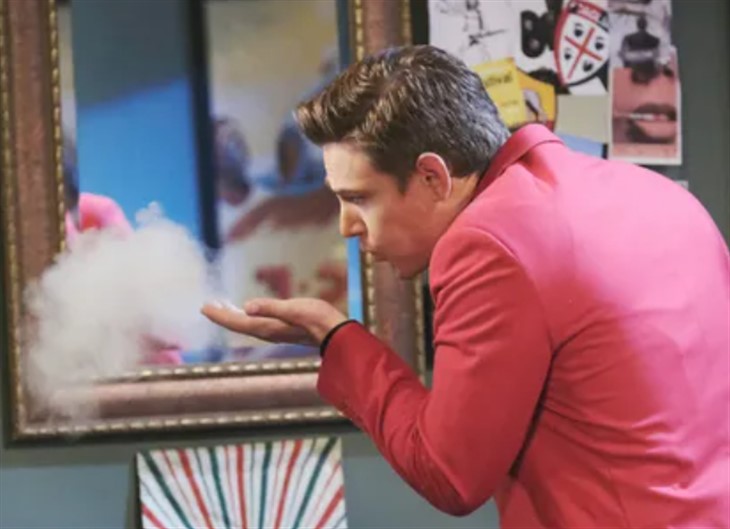 Days of Our Lives spoilers tease that Johnny DiMera (Carson Boatman) also known as Johnny DiDevil will double cross his father, EJ DiMera (Dan Feurreriegel) and testify against him in court in an upcoming episode of Days of Our Lives!

Days of Our Lives viewers will recall that when Chad DiMera (Billy Flynn) was intending to tell the truth on the stand in EJ’s trial, Johnny put a remote chokehold on him! Days of Our Lives viewers will recall that Chad had caught Lucas Horton (Bryan Datillo) at Kate DiMera’s (Lauren Koslow) computer and quickly deduced that he’d cooked the books to make it look like EJ had been paying the person who’d held Sami DiMera (Alison Sweeney). Chad had gone to Kate prior to the beginning of EJ’s trial and told her he was going to tell the truth, even though Kate tried to talk him out of it. But when Chad started to testify, he just got all choked up and couldn’t complete even a sentence thanks to Johnny DiDevil, and that’s all part of his plot to make sure EJ goes to prison – or worse!

Days of Our Lives viewers will recall that Johnny as himself wanted to do anything except work for DiMera Enterprises, and especially not for his father-he wanted to be a moviemaker, although a possession movie may no longer have been an option! But as Johnny DiDevil, Days of Our Lives viewers saw him not only make his father’s dreams come true by telling him he wanted to work for him, he convinced EJ to sign all his DiMera shares over to him! He had the paperwork ready for him to sign right there in the courtroom, although Belle Brady, (Martha Madison) his attorney had advised him not to rush into it; and that didn’t seem to be the only devilish trick that “Johnny” pulled. A very un-EJ like and rather undignified EJ pulled Abigail DiMera (Marci Miller) into a passionate kiss which she tried to get away from, just as Chad walked through the door!

Days of Our Lives viewers know that Johnny DiDevil swore to Stefano DiMera’s (Joseph Mascolo) portrait that he’d kill EJ, and although that hasn’t happened yet, he will double cross him! Days of Our Lives viewers know that will be a more devilish double cross than he pulled by getting him to sign all his shares over to him! Johnny DiDevil’s plans are to get rid of EJ in any way that he can, by death as implied by his grandmother Susan Banks (Stacy Haiduk) when she feared that satan in Johnny was going to kill her Elvis! But for now, a nice long prison term for kidnapping Sami will do, and Johnny will get himself called to the stand to testify, and he’ll testify against EJ! EJ obviously will be blindsided and betrayed as he sees this person who he thought was his son on the stand testifying that he saw him making the payments to the kidnapper!