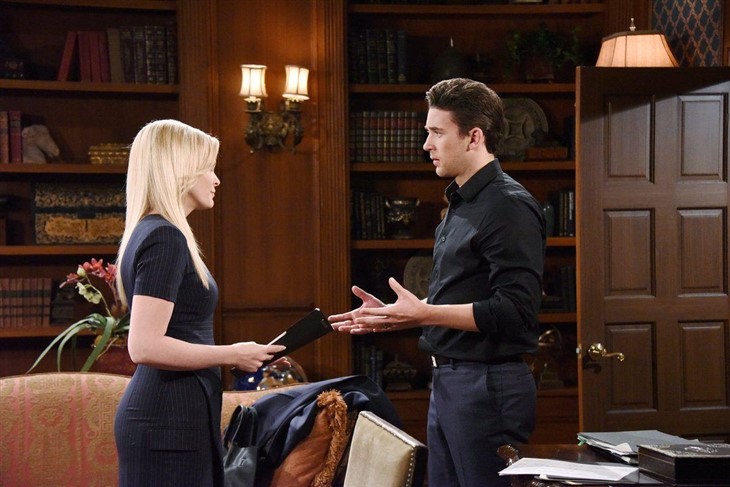 Days of Our Lives spoilers for the week of March 7 reveal that Belle Brady (Martha Madison) confronts Chad DiMera (Billy Flynn). Belle straight-up asks Chad if he lied on the witness stand during EJ DiMera’s (Dan Feuerriegel) trial. Will Chad tell the truth or continue to lie? How will Tony DiMera’s (Thaao Penghlis) discovery affect EJ and Chad?

DOOL spoilers reveal that Chad and Kate Roberts (Lauren Koslow) discussed EJ paying the price for Lucas Horton’s (Bryan Dattilo) crime. Chad and Kate’s conversation was overheard by Tony. When Tony learned that Chad lied on the stand at EJ’s trial, he confronted his brother. Tony was shocked but also deeply disappointed. Tony reminded Chad that EJ is his brother.

Tony wasn’t able to do anything about the situation at the time. Tony and Chad had a mission and that was to head to a deserted island where Abigail DiMera (Marci Miller) is being held hostage. Tony and Chad will save Abigail, Sarah Horton (Linsey Godfrey), Steve “Patch” Johnson (Stephen Nichols) and Kayla Johnson (Mary Beth Evans).

The DiMera brothers will also have to wrestle with what to do about Kristen DiMera (Stacy Haiduk). However, expect Tony’s discovery about Chad to be picked up when everyone returns to Salem.

During the week of March 7, Belle will start to ask more questions in an effort to clear EJ. While EJ is in prison, he is in mortal danger. Clyde Weston (James Read) isn’t the only threat to EJ, though. Orpheus (George DelHoyo) will also get roped into EJ’s prison storyline.

Belle makes a discovery but probably can’t prove Chad lied on the stand. Belle will do what she can to get Chad to confess, though.

Days of Our Lives spoilers reveal that Belle will find it difficult to prove that EJ is innocent. While Chad’s perjury could grant EJ a new trial, he still has to be found innocent of kidnapping Sami DiMera (Alison Sweeney).

In order for that to happen, the real captor will have to be exposed. That means Belle will have to get some help finding out the truth and proving that Lucas is guilty. Belle just might get that help from Tony. Will Tony really betray Chad to save EJ? He just might, especially if he learns that EJ’s life is in danger behind bars. What will happen when Chad’s perjury is exposed? Will he face criminal charges or can there be a happy ending for everyone?