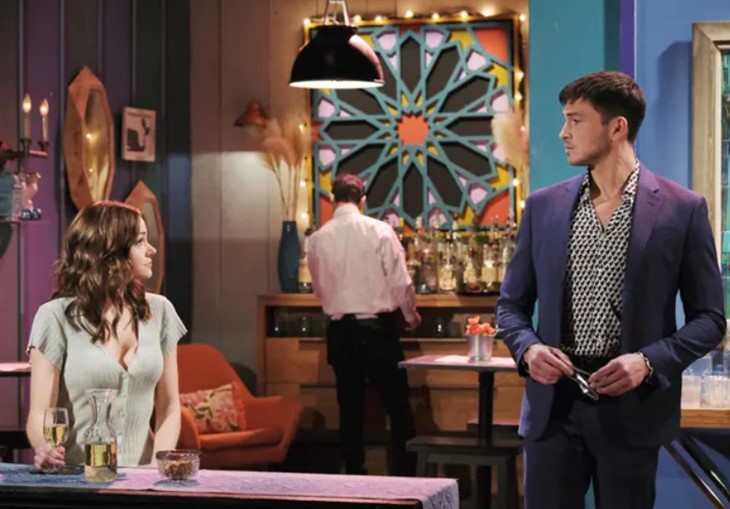 Days of Our Lives spoilers reveal that Alex Kiriakis (Robert Scott Wilson) will continue pining over Stephanie Johnson (Abigail Klein). When Stephanie decides to give Alex another chance, she could make a horrifying discovery. Could this have something to do with Allie Horton’s (Lindsay Arnold) scandalous suggestion to Chanel Dupree (Raven Bowens)?

DOOL spoilers reveal that during a recent episode, Allie blasted Chanel. It was over Allie believing that Chanel still has an interest in Johnny DiMera (Carson Boatman). Even though Chanel tried to reassure Allie, there will continue to be bouts of jealousy.

While Chanel might think that Allie just needs time to get over the love triangle drama. Allie could come up with a more drastic idea, though.

It is teased that Allie will have a chat with Will Horton (Chandler Massey). After that conversation, Allie could put a new plan in motion. It is hinted that Allie could change her mind about her and Chanel sleeping with Alex.

Days of Our Lives spoilers reveal that Alex has been pursuing Stephanie relentlessly. Then, Alex got fed up after a tense conversation with Stephanie. Alex had no idea that Stephanie just learned Kayla Johnson (Mary Beth Evans) was hospitalized.

After venting about Stephanie, Alex realized that her reaction was due to Kayla’s hospitalization. So, Alex will probably try to make things right. The only issue is that Stephanie is now bonding with Chad DiMera (Billy Flynn). So, Alex will probably feel discouraged afterward. Alex could think about going back to his player ways. This could be tied into Allie and Chanel’s storyline.

However, Stephanie could decide to give Alex another chance. When she goes to find Alex, will she also find Allie and Chanel? How will Alex explain this one to Stephanie? Is there any possibility of forgiveness? Could Alex’s actions push Stephanie into Chad’s arms?

What do you think Allie’s scandalous suggestion will be? Would Allie, Chanel and Alex really sleep together? If so, will Stephanie end up catching them in the act? Share your thoughts and remember to keep watching the soap on Peacock to find out what happens next.