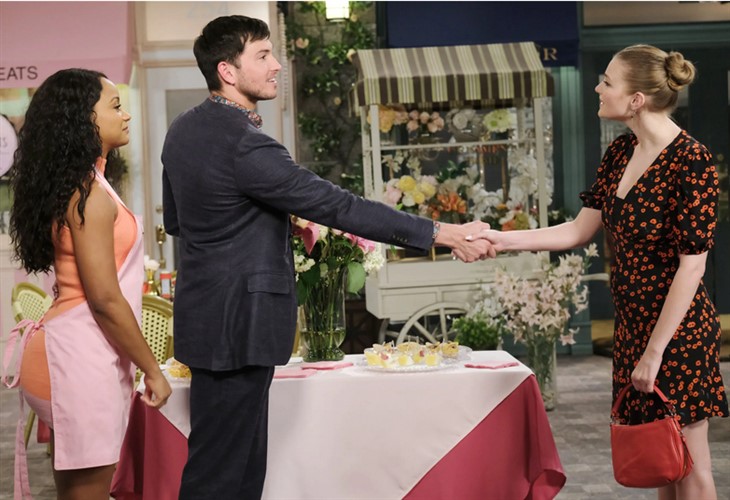 Days of Our Lives spoilers reveal that Chanel Dupree (Raven Bowens) and Allie Horton (Lindsay Arnold) recently dealt with some jealousy. It is teased that Allie will be stunned by Chanel’s scandalous suggestion. With the couple continuing to get closer to Alex Kiriakis (Robert Scott Wilson). Chanel has always pushed the limits with passion, so could she come up with a new relationship dynamic?

DOOL spoilers reveal that both Allie and Chanel were dealing with a love triangle. Then, Allie chose Chanel over Tripp Johnson (Lucas Adams). Then, Chanel had to make her decision between Allie and Johnny DiMera (Carson Boatman). In the end, Chanel chose Allie but they are still going through some relationship struggles.

Once Johnny left the DiMera mansion and was booted out of Ava Vitali’s (Tamara Braun) place, he went to Allie and Chanel’s apartment. Chanel let him stay but Allie wasn’t totally on board with the idea. Even though Allie did give in, there are already problems.

Chanel spotted Johnny sleeping on the couch and it was clear those old feelings began stirring up. Even though nothing happened, Allie exploded with jealousy. Allie told Johnny it was time for him to leave. Then, Allie lashed out at Chanel, assuming she was going to cheat with Johnny. Chanel managed to do damage control by passionately kissing Allie and making it clear that she only wants her.

Days Of Our Lives Spoilers – Stephanie Johnson And Chad DiMera

Days of Our Lives spoilers reveal that Alex has become friends with Allie and Chanel. Alex believes that Stephanie Johnson (Abigail Klein) is his dream woman. However, it is teased that during the week of October 3, Chad DiMera (Billy Flynn) gives Stephanie a helping hand.

However, since Chad just said goodbye to a vision of Abigail DiMera (formerly played by Marci Miller), could his next romance be with Stephanie? If Stephanie ends up choosing Chad, it will leave Alex frustrated and not knowing where to turn.

It is teased that during the week of October 10, Allie will be shocked by Chanel’s scandalous suggestion. Could this suggestion have to do with Alex? It was stated a few weeks ago that the move to Peacock would allow for more risqué storylines. So, could Chanel suggest that she and Allie become a throuple with Alex?

What do you think is going to happen with Chanel’s scandalous suggestion? Would Chanel really think of having a throuple dynamic with Alex? How will Allie feel about that? Share your thoughts and remember to keep watching the soap on Peacock to find out what happens next.