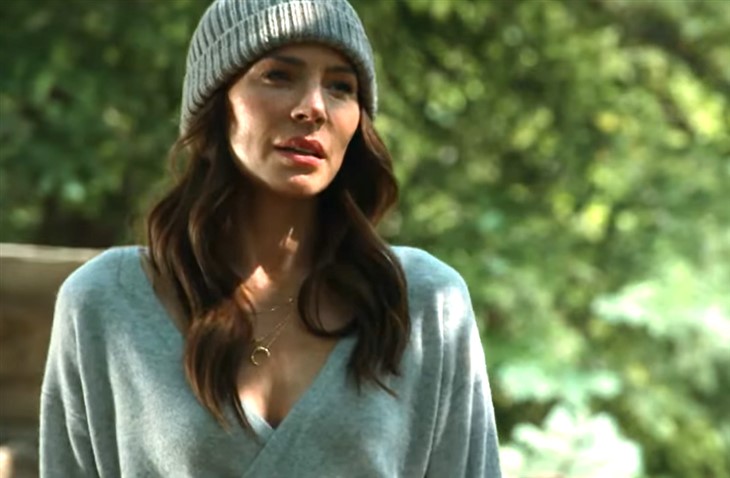 The Bold and The Beautiful spoilers tease that Taylor Hayes (Krista Allen) will deliver an ultimatum when Ridge Forrester (Thorsten Kaye) tracks her down in Aspen. She’ll tell him her first, and her only, and no more Brooke Forrester (Katherine Kelly Lang) waffling or she’s gone for good!

The Bold And The Beautiful Spoilers – Taylor Hayes Is Fed Up

Taylor’s been back in Los Angeles several months now, only to have realized nothing much has changed as far as her and Ridge are concerned. She got her hopes up when they traveled to Monaco together to look for Steffy, and then found both Steffy and John “Finn” Finnegan (Tanner Novlan). They engaged in a passionate kiss, but then after they got back to Los Angeles, Ridge went back and moved in with Brooke again just like he always did.

Taylor is fed up with Ridge’s waffling ways and she and Steffy decide to go to Aspen after Bill Spencer (Don Diamont) mentioned a property he wants to sell. She decides to go to get away from Los Angeles and Ridge to know her heart, and possibly buy Bill’s property and move there.

B & B Spoilers – Years Of Hurt

Other than those years that Taylor was missing and presumed dead, living as Dr. Taylor Ashford Hamilton-Hayes Forrester Rashid Forrester Marone Jones, Princess of Morocco, Ridge waffled. Brooke would chase after him, just like she did the first time she laid eyes on him and steal him back whether he was with someone or not including Taylor.

Taylor recalled Stephanie Forrester (Susan Flannery) having a very fitting nickname for Brooke, even though they seemed to make up right before Stephanie passed away. Taylor remembers years of hurt every time Ridge became restless and ran back to Brooke, usually with her beckoning him like a siren to a doomed sailor. She cannot understand for the life of her why – Brooke’s a control freak and invades every area of the Forrester family’s lives.

The Bold And The Beautiful Spoilers – Ridge Forrester Shows Up

Ridge shows up in Aspen looking for Taylor after being hurt over Brooke’s lying about turning in Thomas Forrester (Matthew Atkinson) to CPS, although Taylor wasn’t happy how they knew. She knows when she has to turn a client in she cannot divulge anything about the source of the problem; child abuse is one area doctor-patient confidentiality doesn’t apply. Ridge tells Taylor he now knows his heart and he wants her back again, he’s moving out from Brooke’s house.

Taylor has heard this same thing from Ridge time and time again going many years back. She gives him an ultimatum, she wants to be first and only to him; either he proves he loves and wants to be with her only or she’s gone forever.