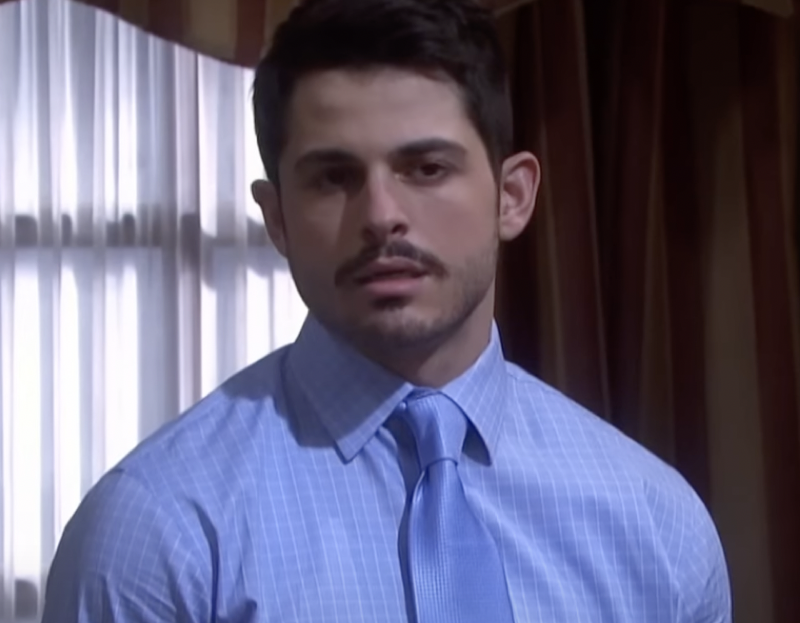 Days of Our Lives spoilers reveal that Robert Scott Wilson isn’t playing Ben Weston anymore. As previously speculated, it is now confirmed that the actor will be portraying Alex Kiriakis. TV Insider not only chatted with Wilson on the new role but shared a first-look clip. So, let’s discuss Alex coming to Salem and how Sonny Kiriakis (Zach Tinker) reacts.

DOOL spoilers reveal that Ben and Ciara Brady Weston (Victoria Konefal) left Salem with their baby. While Konefal was not on contact, Wilson was, which made fans wonder about the character’s future.

Soon, it was teased that Wilson would still be on the soap but as a different character. Soon, the clues started adding up about who the new character could be. That has been confirmed and TV Insider chatted with Wilson about the new role.

In a YouTube clip, the scene begins inside the Kiriakis mansion. Sonny is clearly upset about something as he storms into the living room. Right before entering, Sonny yells for his uncle, Victor Kiriakis (John Aniston). Sonny says that he needs to talk to Victor.

However, when Sonny actually zooms into the living room, he doesn’t see Victor. Instead, it’s a shirtless and sweaty Alex guzzling a drink. Alex smugly looks at Sonny and says he is not Victor.

Days of Our Lives spoilers reveal that Sonny’s jaw drops when he sees Alex in Salem. Alex smiles at his brother. However, Sonny’s reaction seems more of concern and shock. Perhaps Sonny worries about why Alex is in town. After all, who is handling the foundation in Phoenix if Alex is here?

Expect to see Alex on-screen beginning Wednesday, July 27, 2022. It is teased that Sonny will be overjoyed about a reunion. So, even though the first look has Sonny looking shocked and worried, he is happy to see Alex. However, that doesn’t mean things will continue to go smoothly between the brothers.

As fans know, soaps rely on drama and conflict to stay on the air. So, what will tear these brothers apart? Will it be Titan Industries? Kiriakis family issues? Perhaps a love triangle, especially since Sonny will be alone after Will Horton (Chandler Massey) jets off to Hollywood? Maybe Alex will make some decisions and do some things in Salem that rub Sonny the wrong way.

Of course, it’s also possible that Alex is the good guy and we will see Sonny behaving badly. The storyline really could go in any direction and what’s better is that Alex has a clean slate. So, writers could do anything with his character. Share your thoughts and remember to keep watching the NBC soap to see what happens next.