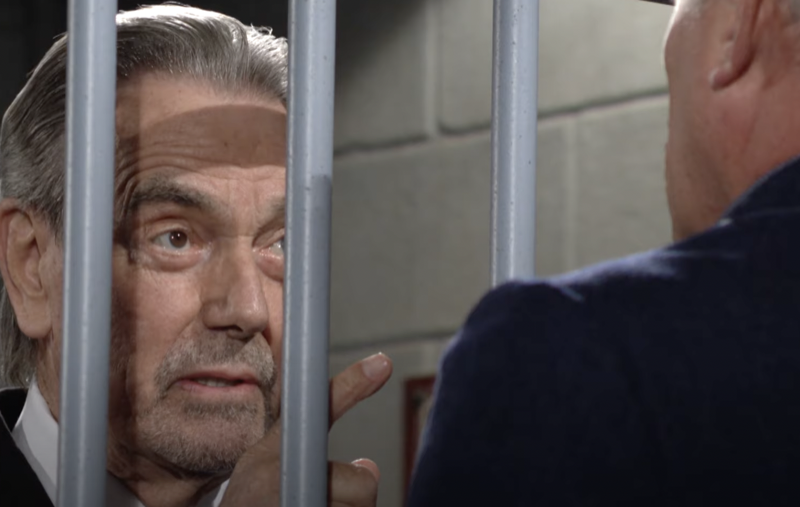 The Young and The Restless spoilers and rumors tease that while Ashland Locke (Robert Newman) is locked up in jail, Victor Newman (Eric Braeden) might plot to arrange an Ashland assassination.

The Young And The Restless Spoilers: A Trap Was Set, And Ashland Locke Fell In It

A trap was set for Ashland, and he fell in it; as he was playing with Harrison Locke (Kellen Enriquez) Diane Jenkins (Susan Walters) saw him. Soon, Michael Baldwin (Christian LeBlanc) arrived as well as Kyle Abbott (Michael Mealor), Nikki Newman (Melody Thomas Scott) and Summer Newman Abbott (Allison Lanier). Harrison was hurried away to watch the ducks when the police came, although Locke had a few minutes with him -he’d told him he had to go away on business again.

The Young and the Restless spoilers show Locke was soon taken off to the Genoa City Police Department jail, but bragged that he’d be out soon when Victor arrived. Victor threatened him – he told him no one breaks his daughter’s heart; NO ONE!

Y & R Spoilers: Victor Newman Would Like To Arrange For Ashland Locke To Be Found Hung In His Cell

Victor would like to arrange for Locke to be found hung in his cell, but there might not be time for that; and it’s a downright dirty shame. With evidence of him going off the rails and trashing his hotel room Victor’s sure a faked suicide would fly.

But the best revenge isn’t killing someone, it’s making them wish you had, and Victor plots in his mind which it should be – killing, or making him wish he’d been killed. Locke has yet to learn the lesson that you don’t mess with The Mustache –or his family.  But some bugs cannot be killed by stepping on them – they just skitter away, and that’s what Locke reminds Victor of; there needs to be a permanent solution.

The Young And The Restless Spoilers: Victor Newman Would Like To Perform This Extermination Himself

Victor would like to perform this extermination himself, because Locke’s a real vermin and he simply needs to go, but he knows even he wouldn’t get away with murder. He needs to find a hit man who’d be loyal and not tell a soul; Locke just needs to disappear, and his body never found. Locke can be assumed to have jumped bail if he gets it, and pity the poor bounty hunter who finds his remains – what’s left of them.

Victor needs to get this Ashland assassination ball rolling as soon as possible, who knows what the Locke Ness Monster might do next. Nick has always suspected that he killed his teenage friend, the real Ashland Locke whose life and identity he stole.

Y & R Spoilers: I Will Crush Him

Victor vows he will crush Ashland Locke before he has a chance to ever hurt his family again, and he hopes to get it done before he gets out on bail. But unfortunately, the slippery little snake has slithered his way out of the Genoa City Police Department jail before Victor could make arrangements for his assassination. But soon Locke will find that he’s a hunted man, and nothing he can do or say can make up for the harm he’s done to Victor’s family. But the Ashland assassination plan is still in the works, and there won’t be anywhere he can hide from Victor’s assassin.